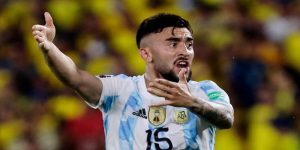 Argentina forward Nicolas Gonzalez suffered an injury in training on Thursday and is out of the World Cup, his country’s football federation (AFA) said.

The 24-year-old Fiorentina forward has been replaced by Angel Correa of Atletico Madrid.

“In training today, Nicolas Gonzalez tore a muscle and has been withdrawn from the list for the World Cup,” the AFA said in a statement.

Argentina coach Lionel Scaloni said on Wednesday after his team thrashed the UAE 5-0 in their final warmup game that “some players are not 100 percent, we have a few small problems”.

Gonzalez, 24, was one of the players who sat out the match in Abu Dhabi as Argentina extended their unbeaten run to 36 matches.