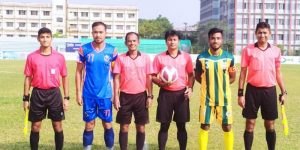 Apart from Bablu’s two goals in the match, skipper Joyonto Kumer Roy and Isa Faisal defender Isa Faysal supported him with a lone goal each for Police FC who led the first half by 3-0 goals.

After the resumption, Rahmatganj were desperate to stage a fight back in the match, but due to pack defense Rahmatganj hardly failed to put any pressure on Police FC.

Mohammad Abdullah eventually pulled one back scoring a lone goal for Rahmatganj converting a spot kick in the 84th minute while Faysal sealed the victory scoring the third goal for Police FC in the 88th minute of the match.

Rahmatganj ultimately had to leave the field with defeat as after the goal it was quite impossible for them to stage a fight back in the remaining proceeding.

Bangladesh Police FC clearly dominated the entire proceeding and notched their deserving victory on the day while the traditional old Dhaka outfit Rahmatganj MFS were off-colored except the day’s lone goal.

Police FC will play their next match against BFF Elite Football Academy on Sunday (Nov 20) at the same venue while Rahmatganj MFS will play against Lieutenant Sheikh Jamal Dhanmondi Club on the same day at Shaheed Dhirendranath Datta Stadium in Cumilla.