Mbappe on target for five-goal PSG before World Cup 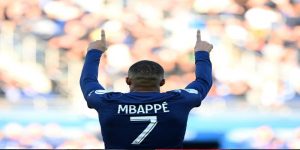 Kylian Mbappe scored and came through unscathed along with fellow Paris Saint-Germain stars Lionel Messi and Neymar in their final match before the World Cup, a 5-0 Ligue 1 rout of Auxerre on Sunday.

The news was less good for Morocco’s World Cup hopes as Marseille striker Amine Harit was carried off after injuring a knee in his side’s 3-2 win over Monaco in the evening in the last Ligue 1 game before the break.

PSG coach Christophe Galtier opted not to rest the attacking trio against the Burgundy side as the French champions sought to extend their lead at the top of the table before the break for the tournament in Qatar.

“None of my players had sent me a signal of fear,” said Galtier.

“My obsession was that my team could express themselves as freely as possible without the psychosis of an injury.

“It would have been a great sadness for me if one of my players were injured before the World Cup and I quickly made the changes to spare each of them.”

Mbappe scored the opener after 11 minutes in Paris for his 12th league goal this season after good work by Messi and two other World Cup bound players Moroccan Achraf Hakimi and Portuguese Nuno Mendes.

Spain’s Carlos Soler nodded in the second after 51 minutes and then set up Hakimi for the third six minutes later. Two players who are not going to Qatar, Renato Sanches and Hugo Ekitike came off the bench and added goals in the final ten minutes.

The Parisians moved five points ahead of Lens, who won 2-1 at home against Clermont on Saturday, with Rennes a further five points adrift in third.

Galtier added: “We are first and undefeated, we worked on different systems and it took us time to find the better solution so that my fantastic trio can express themselves and find the best balance.

“There are still many lines of work. The only small regret I have is not having beaten Benfica in the Champions League.”

PSG drew twice with the Benfica in their Champions League group and qualified second behind the Portuguese club.

For their final match before the World Cup, the MNM trio — Messi, Neymar, Mbappe — did not really sparkle in a game played without great intensity.

That did not prevent the champions giving a demonstration of their goal-scoring prowess before a break until their next Ligue 1 match on December 28 against Strasbourg.

Messi hit the post after 66 minutes, Neymar collapsed at the slightest contact and played in slow motion, far from flamboyance of his first part of the season.

“I don’t know if my players were afraid of injuring the Parisians before the World Cup,” said Auxerre coach Christophe Pelissier.

“Of the five goals we gave them three were our errors.”

Galtier gave some playing time to France defender Presnel Kimpembe, who came on for the final quarter of an hour having spent a month out with an Achilles tendon injury.

In Monaco, Harit was carried off on a stretcher after injuring a knee in the 58th minute.

“From what we know, it’s a very big injury,” said Marseille coach, Igor Tudor. “He got injured just before the World Cup, we talked about it all week. I am very sad”.

The win lifts Marseille into fourth while Monaco stay sixth, one point ahead of Lille who beat bottom side Angers 1-0.

Also down at the bottom, Brest beat Troyes 2-1 while Nantes came from two goals down for a 2-2 draw at home against Ajaccio.