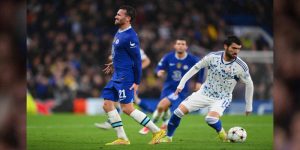 England are likely to be without Ben Chilwell at the World Cup after the left-back pulled up with a hamstring injury in Chelsea’s 2-1 Champions League win over Dinamo Zagreb on Wednesday.

Denis Zakaria scored the winner on his Chelsea debut as the Blues came from behind to beat the Croatian champions at Stamford Bridge.

But the night ended on a sour note for Chelsea and England when Chilwell, 25, had to be helped off the field in stoppage time to seemingly spoil his hopes of going to Qatar.

“We will have to scan it and see how it is.”

Chilwell, who has 17 caps for the Three Lions, was part of the England squad that reached the final of Euro 2020.

England open their campaign against Iran in less than three weeks.

Zagreb had more to play for with Chelsea already assured of top spot in Champions League Group E.

Victory would have secured Dinamo a place in the Europa League knockouts and they made a flying start when Bruno Petkovic headed in after seven minutes.

Defeat in the Croatian capital when the sides last met in September was the final straw for the Chelsea board before they sacked Thomas Tuchel.

New boss Potter was beaten for the first time in 10 games in a 4-1 thrashing on his return to Brighton at the weekend.

Potter named a stronger-than-expected line-up in response and two of his star names combined for the equaliser as Pierre-Emerick Aubameyang’s backheel teed up Raheem Sterling for his first goal in nine games.

Zakaria has had to be patient for an opportunity since joining from Juventus on loan on transfer deadline day.

There have even been reports of the Swiss midfielder’s loan being cut short in January, but he made his mark by side-footing into the bottom corner from Mason Mount’s cross.

“I have to say, (it’s been) very, very difficult,” Zakaria told BT Sport. “I like to play and always want to play.

“When you have to see your teammates from the bench it is not easy but I was always behind the team and was waiting for my chance. Today it came and I took my chance.”

Aubameyang hit the bar in the closest either side came to a goal after the break.

But the biggest blow of the night for the English giants came in stoppage time when Chilwell fell to the floor clutching his hamstring before needing assistance to hobble off the field.