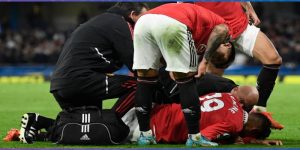 As Manchester United defender Raphael Varane left the field in last weekend’s 1-1 draw with Chelsea, the Frenchman’s face sank into his shirt to hide his tears from the cameras.

Within seconds of pulling up at Stamford Bridge, Varane was aware his appearance at the World Cup was in jeopardy.

The former Real Madrid centre-back may have got lucky, with an initial diagnosis of a small hamstring tear giving him a chance of making it to Qatar.

Many more have not been so fortunate.

N’Golo Kante will not feature in France’s defence of the tournament.

Uruguay will be without Ronald Araujo and Portugal shorn of Diogo Jota.

Germany have concerns over the fitness of Bayern Munich duo Manuel Neuer and Leroy Sane.

“What see is a really packed schedule now with a lot of players playing a lot of minutes,” said Southgate earlier this month.

“I think realistically we will lose more. It’s so intense, and the players are playing so much football.”

The uprooting of football’s traditional calendar to fit in a first ever mid-season World Cup has resulted in fixture congestion at club level and little time to prepare for international managers.

Europe’s major leagues will pause just a week before the World Cup kicks off on November 20.

To make space in the schedule, the group stages of European club competitions were squeezed into two-month period.

As a result, many clubs will have played 13 times in 42 days before the World Cup break.

“I am pretty sure they have one eye on the World Cup,” said Manchester City manager Pep Guardiola.

“Now it is just two or three weeks before the end, so it is the last effort.

“I always say the best way to not get injured is to be focused and give your maximum in the game. When you lose the attention is when you are at risk.”

Liverpool boss Jurgen Klopp claimed his players remain “1000 percent” committed to the cause at club level.

But Klopp has pointed to injuries and players playing too often in a short timeframe as the major factor behind his side’s wretched start to the season.

“With the amount of games we have some players are overplayed,” said the German after Saturday’s 2-1 defeat by Leeds.

Heading into the final games of the Champions League group stage this week there are four places in the last 16 still up for grabs.

Many more games have top spot in the group or a place in the Europa League in the new year on the line.

But the fixture pile-up leaves both countries wounded by the loss of stars for what should be football’s marquee event, and clubs wary of players protecting themselves to be fit for the World Cup.

“It is a very intense period of the season with too many games in my opinion,” said Real Madrid coach Carlo Ancelotti.

For those headed to the Middle East, there is no let-up once in Qatar either.

According to a report earlier this year by global players’ union FIFPro, 54 percent of players said they had suffered an injury due to schedule overload, while 82 percent of coaches said they observed mental health issues in players caused by playing too many games.

But player welfare has been forgotten as governing bodies, national associations and clubs all fight for their slice of the pie from football’s commercial appeal.