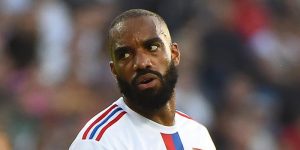 The former France and Paris Saint-Germain boss took charge earlier this month after Dutchman Peter Bosz was sacked following a dismal start to the season.

Houssem Aouar, who was little used under Bosz this term, put Lyon ahead on 33 minutes with his first goal of the season in Montpellier.

Elye Wahi’s superb overhead kick brought the hosts level on 70 minutes before both teams were reduced to 10 men when a clash between Stephy Mavididi and Sinaly Diomande resulted in a pair of red cards.

Lacazette had the final say as he struck the winner in the 90th minute to halt Lyon’s wretched series of results.

Lyon had lost 3-2 at Rennes in Blanc’s first game at the helm last weekend.

David Pereira Da Costa scored the winning goal for Lens in the 78th minute, hitting the net after a deflection off Marseille defender Leo Balerdi.

“Sometimes football is not fair and that’s the case this evening,” argued Marseille coach Igor Tudor.

“If one team deserved to win I think it was ours. I told my players not to be said. I’m proud of them, it’s one of the best, if not the best, matches of the season.

Surprise package Lorient, who now sit third, visit Troyes on Sunday. They are six points behind PSG after Kylian Mbappe scored twice and set up Lionel Messi for the other goal in Friday’s 3-0 win at Ajaccio.