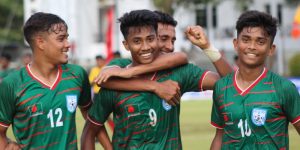 Mirajul Islam slammed a brilliant hat-trick and steered Bangladesh U-17 football team to the semifinals as group champions thrashing the Maldives by 5-0 goals in their second and last group A match of SAFF U-17 championship on Wednesday.

Apart from Mirajul’s hat-trick with three goals, Nazmul Huda Faysal and Murshed Ali supported with a lone goal each for the boys in red and green, who led the first half by 2-0 goals.

Held at Racecourse Int’l Stadium in Colombo, Sri Lanka, Bangladesh had to wait a few minutes to take the lead when Namul scored the first goal in the early 4th minute.

Earlier, Bangladesh U-17 soccer team got off to a flying start as they thrashed host Sri Lanka by 5-1 goals in their opening group A match held on Monday last.

The top two teams from each group will play the cross semifinals on September 12 while the final of the tournament is slated on September 14.

All the matches will be held at Racecourse Int’l Stadium in Colombo.