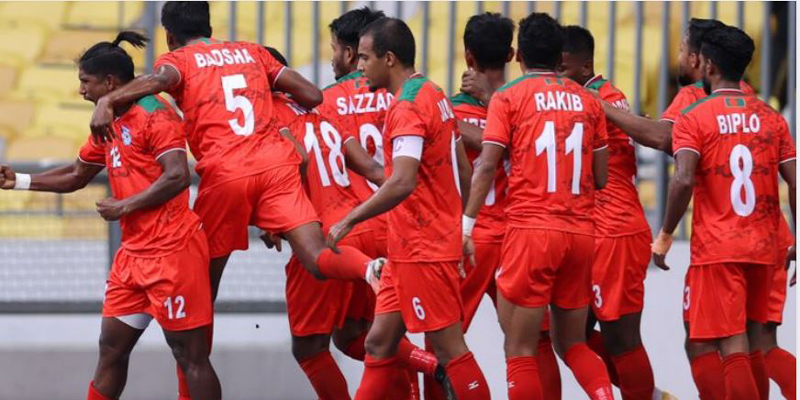 Having both lost their opening match, a win was needed and Turkmenistan laboured through both halves to get the three points with Bangladesh’s threat waning as the game went on.
Turkmenistan threatened in the first minute of play when Elman Tagayev whipped in a corner that was met on the volley by Ahmet Atayev, but his shot marginally missed the crossbar on its way out for a goal kick.

With their third corner of the game already coming in the first seven minutes, Turkmenistan opened the scoring through Rovshengeldi Halmammedov who took a low shot first time when Altymyrat Annadurdyyev’s corner landed close to his foot.

Bangladesh equalised at the other end in beautiful fashion, when Rimon Hussain launched a long throw-in into the penalty area which was met by Rakib Hossain’s header but was saved by the keeper, only for Mohammed Ibrahim to charge in and score on the rebound to make it 1-1.

Midway through the first period of play, a scramble ensued in the Turkmenistan penalty area with a few blocked shots that culminated with Hossain taking a weak shot that was saved and held by Mammet Orazmuhammedov.

Turkmenistan almost got their second when Atayev flighted in a cross from deep which Zafar Babajanov attempted to scorpion kick into the net, but his shot missed the crossbar by inches.

At the hour mark, Turkmenistan missed a golden chance to go ahead when Arslanmyrat Amanov sent in a corner which fell to Myrat Annayev, with the Altyn Asyr forward firing in a low shot that missed Anisur Rahman’s goal by a short distance.

Bangladesh themselves had a chance to go ahead 20 minutes from time when Foysal Ahmed dribbled his way into shooting range from his own half, but under challenge from Turkmen defence he took a shot that was saved comfortably.

Turkmenistan eventually did pull ahead with 13 minutes of play left through captain Amanov, who teamed up with Annadurdyyev in a blistering counterattack in which the latter ran down the left flank and put in a low cross for the onrushing Amanov to tap in to make it 2-1.

Yazguly Hojageldyyev’s men face Bahrain in the final match of the group on Tuesday, while Bangladesh take on group hosts Malaysia in an almost impossible salvage operation for Javier Cabrera’s charges.