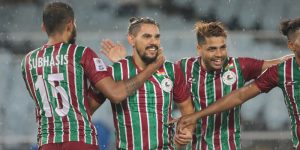 Despite the defeat, Bashundhara Kings still have the hopes of qualifying for the inter-zone playoff semi-finals they will face new Group D favourites – Gokulam Kerala in the ultimate group fixture on Tuesday (May 24).

On the other hand, ATK Mohun Bagan also kept of qualifying their next round hope alive after the day’s resounding victory and they will play their last group match against Maldives’ Maziya Sports and Recreation Club also scheduled to be held on the same day (Tuesday).

Bashundhara Kings made two changes in their squad with Mohammad Ibrahim left out from the best eleven.Even their goal-scorer against Maziya Sports and Recreation Club Nuha Marong was not even there on the bench. Coach Oscar Bruz›n kept Rimon Hossain and Chinedu Idneyi in the squad in replace of them.

The match started with Bashundhara Kings got the first scoring chance in the very first minute. However, on the eleventh minute, the match had to be stopped due to heavy downpour.

After the restart, ATK Mohun Bagan took full charge of the game, though Bashundhara too, had their chances. Robson da Silva and Mohammad Rimon Hossain saw their shots come off the woodwork and the crossbar. The first goal for ATK Mohun Bagan came in the 24th minute when winger Liston Colaco put the local side ahead utilizing the mistake of Bishwanath Ghosh in the defence.

The second goal came for Mohun Bagan in the 34th minute, it was again Liston Colaco who sent the ball home perfectly after dodging past the goal keeper utilizing a through pass from Joni Kauko.

After resumption, Mohun Bagan came to the field with more organized way and got the reap in the 53rd minute when Liston Colaco completed his hat-trick goal again utilizing mistakes from Bashundhara defence. Forward Manvir Singh made full use of it and delivers a low cross towards Liston Colaco into the box. Colaco made no mistake to send the ball to the net with a perfect finishing.

David William added the tally scoring the fourth goal for Mohun Bagan in the 77th minute of the match.

Mohun Bagan who played poor games against Gokulam Kerela in their first match compared to their standard, flared up in their second match and notched their deserving victory on the day while Bashundhara Kings created some scoring opportunities early in the match but they failed to keep the tempo in the remaining proceeding.

On the other hand, Indian super league side ATK Mohun Bagan started their campaign in the worst possible way when they suffered a 2-4 defeat to fellow Indian side, Gokulam Kerala FC.