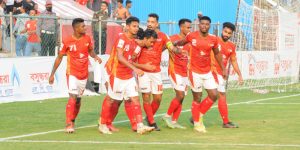 With the day’s win,  Bashundhara Kings again moved top of the table with 15 points from six matches while Sheikh Russel Krira Chakra remained at their previous credit of five points playing the same number of matches.

After the barren first half, Robson finally broke the deadlock scoring the all-important goal for Kings converting a spot kick in the 83rd minute of the match.

Sheikh Russel however tried heart and soul to stage a fight back but could not convert any in the remaining proceeding.

Bashundhara Kings will play their next match against Mohammedan Sporting Club Limited  on Saturday (March 5) at the same venue while Sheikh Russel KC meet Uttar Baridhara Club on the following day (May 6) at Sheikh Fazlul Haque Mani Stadium in Gopalganj .

While Sheikh Russel Krira Chakra earlier played out to a 1-1 goal draw with Mohammedan Sporting Club Limited in their league opening match, again split point with Chittagong Abahani Limited playing to a 1-1 goal draw in their second match, beat Saif Sporting Club by 1-0 goal in their third match, went down a 1-3 goal defeat to Abahani Limited, Dhaka in their fourth match and suffered a 0-1 goal defeat to Sheikh Jamal Dhanmondi Club in their fifth match of the league.