Booters to get little time to take preparation for two friendlies 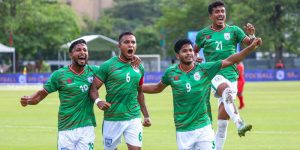 The national booters will get little time to take preparation as the national team’s residential training camp for the two FIFA friendlies will begin from March 18 in Dhaka.

After the meeting, National teams committee’s chairman through a virtual press conference said the 9th round of the ongoing Bangladesh Premier League will end on March 18.

Nabil however does not see any problem in the little preparation of the team for the two matches.

He said the league is going on and the new coach is watching the league matches.

He also visits the clubs and meets with the players. These are part of his works. Players would also have better fitness due to playing in the league. So there is no need for the long preparation for the two friendliness.

“We are expecting good results from the first assignment of the new coach,” said Kazi Nabil Ahmed by adding that our result will be good in two matches. Nabil informed that the preliminary squad of the national team will be
announced by March 15.