BPL to be held at seven venues 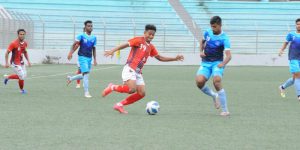 The upcoming Bangladesh Premier League football, which is scheduled to start from February 3, will be held at seven venues across the country.

The meeting also decided to stage the U-18 Football League with the participation of U-18 team of all the twelve clubs of BPL. The fixture of the league however will be finalized in the PLMC’s next meeting.

PLMC’s deputy chairman Abdur Rahim and BFF’s general secretary Abu Nayeem Shohag, were among others, also present in the meeting.