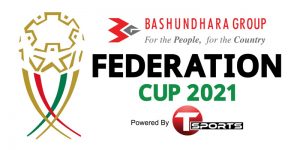 Defending champions Bashundhara Kings will take on Swadhinata Krira Sangha in the first match that kicks off at 4 pm while Abahani Limited, Dhaka face Uttar Baridhara Club in the second match of the opening day’s fixture that begins at 6.45 pm.

The sky blue Dhanmondi outfit Abahani Limited who stated the new season by winning season’s first domestic title of Independence Cup, must be looking forward to carry their good form in the Federation Cup.

On the other hand, Bashundhara Kings must be aiming to retain the title of Federation Cup once again after they failed to win the Independence Cup.

Earlier, on Thursday last, the draw of Federation held with twelve top clubs of the country are take part in the tournament.

Defending champions Bashundhara Kings have been pitted in group A along with Mohammedan Sporting Club Limited and Swadhinata Krira Sangha while the group B consists with Abahani Limited, Dhaka, Sheikh Russel Krira Chakra and Uttar Baridhara Club.