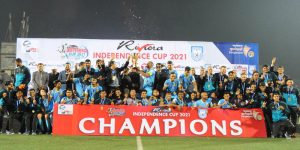 Held at Birshreshtha Shaheed Sepoy Mohammad Mostafa Kamal Stadium in the city’s Kamalapur, it was the second occasions, the sky blue Dhanmondi outfit Abahani Limited lifted the trophy of the Independence Cup after thirty one years as they won the first trophy of the tournament backed in 1990.

In the prolong thirty one years, Abahani however reached final twice of the Independence Cup, but they could not win the title. Finally, they broke the jinx after two and half decades.

This was also Abahani’s first domestic title since they won the Federation Cup in 2018 with Kings winning all the five major trophies.

Defender Tutul Hossain Badsha in his immediate reaction said: “Alhamdulillah, we’re very happy that we have become champions and able to win trophy …we wanted to start well the new season and hoped to continue this spree in the whole season.’

After the barren first half, Rimon Hossain finally broke the deadlock scoring the first goal for Abahani in the 53rd minute with a placing shot off a pass from Raphael Augusto.

Brazilian forward Dorielton doubled the lead for Abahani converting a spot kick in the 61st minute and he completed the tally scoring his second and third goal for Abahani in the 72nd minute.

Bashundhara however tried heart and soul to stage a fight back but could not convert any in the remaining proceeding.

Earlier, Abahani Limited, Dhaka stormed into the final when they blanked Saif Sporting Club by 2-0 goals in the first semifinal while Bashundhara Kings reached final of the tournament when they came from behind beat Bangladesh Police Football Club by 2-1 goals in the second semifinal.