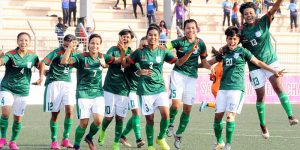 Bangladesh U-19 women’s football team looking forward to continue their winning run as they face all-losers Sri Lanka in their last match of SAFF U-19 Women’s Championship scheduled to be held tomorrow (Sunday) at Birshreshtha Shaheed Sepoy Mohammad Mostafa Kamal Stadium in the city’s Kamalapur.

The match kicks off at 7 pm, following the India-Nepal match that begins at 3 pm.

Bangladesh are in a comfortable position in the points table with seven points from three matches while bottom-ranked Sri Lanka, who are already out from the championship race, yet to open their account playing the same number of outings.

Earlier, Bangladesh, in their opening match, shared point with Nepal playing to a goalless draw, thrashed Bhutan by 6-0 goals in the second match and managed a solitary goal victory over India in the third match.

While Sri Lanka went down a 0-5 defeat to Bhutan in their opening match, suffered also by the same identical margin to favorite India in the second match and lost to 0-6 to Nepal in the third match.

On the other hand, it’ll be a must win game for India to ensure their spot of final.