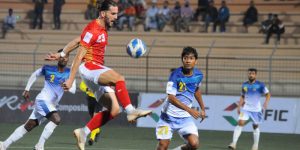 The high voltage final match kicks off at 5.30 pm with both the teams optimistic on winning the trophy.

Earlier, Abahani Limited, Dhaka stormed into the final when they blanked Saif Sporting Club by 2-0 goals in the first semifinal while Bashundhara Kings reached final of the tournament when they came from behind beat Bangladesh Police Football Club by 2-1 goals in the second semifinal.

The traditional sky blue Dhanmondi outfit Abahani Limited, Dhaka also maintained their supremacy in the group phase matches. They beat Swadhinata Krira Sangha by 2-1 goals in t heir first match and emerged group champions by defeating Rahmatganj Muslim and Friends Society by 3-1 goals in their second and last group A match of the competition.