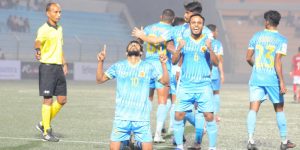 Apart from Daniel Colindres two goals, forward Nabib Newaj Jibon and midfielder Emon Mahmud supported him with one goal each for the winners’ who led the first half by 1-0 goal.

In the day’s match, Colindres broke the deadlock scoring the first goal for Abahani Limited in the 45th minute while after the breather he doubled the lead in the 70th minute of the match.

Jibon further widened the team’s margin scoring the third goal for Abahani Limited in the 67th minute while Emon completed the winners’ tally scoring the fourth goal in the 70th minute of the match.

Kabir of Bangladesh Army Football team was shown direct red card by the referee for his unsporting behavior.