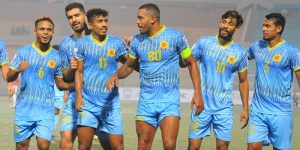 Dhaka Abahani Limited got off to a winning start in the Riviera 11th Independence Cup Football beating Swadhinata Krira Sangha by 2-1 goals in their opening group A match held today (Monday) at Birshreshtha Shaheed Sepoy Mohammad Mostafa Kamal Stadium in the city’s Kamalapur.

In the proceeding, forward Mehedi Hasan Royal and Brazilian midfielder Raphael Augusto scored one goal each for Abahani Limited who led the first half by 1-0 goal. Uzbekistan midfielder Nodirbek scored the lone goal for Swadhinata Krira Sangha.

Mehedi opened an account scoring the first goal for Abahani Limited in the 29th minute while after the lemon break Rapheal doubled the lead scoring the second goal for the traditional sky blue Dhanmondi outfit in the 74th minute of the match.

Nodirbek however pulled one back scoring a lone goal for Swadhinata in the 90+1st minute of the match.

Abahani Limited dominated the entire proceeding and notched their deserving victory while the new team Swadhinat Krira Sangha also offered some resistance in the proceeding, especially in the second half.

Tuesday’s matches: Chittagong Abahani Limited vs Bangladesh Police Football Club at (4 pm) and Bashundhara Kings vs Bangladesh Navy Football team (7.15 pm), both to be held at the same venue.