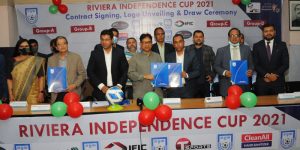 Ahead of the tournament, a sponsor signing ceremony between Bangladesh Football Federation (BFF) and Riviera Composite Industries Limited was held today (Tuesday) at conference room of BFF Bhaban.

“We could not arrange all the tournaments or competitions last year due to COVID-19 , but now we have more time in hand to arrange those competitions and we want start the new football season though the Independence Cup marking the birth centenary of Father of the Nation Bangabandhu Sheikh Mujibur Rahman and fifty years of Independence.

We want to give the right message of independence to the new general through the Independence Cup, he added.

Fifteen teams, twelve teams from premier league and three services teams, split into four groups, will take part in the Independence Cup. The top two teams from each group will qualify for the quarterfinals which will be followed by the semifinals and the final. The final of the tournament is slated on December 18.