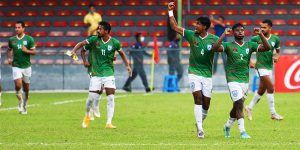 It was brave performance as ten men Bangladesh forced favorite India to play a 1-1 goal draw in their second match of SAFF Championship held today (Monday) at National Football Stadium in the Maldives.

Indian clearly ahead than Bangladesh in terms of recent form or team’s strength. However, Bangladesh captain Jamal Bhuyan was confident of winning the challenge against India after Bangladesh’s confident 1-0 victory over Sri Lanka in their tournament opening match.

Although Bangladesh were not 100 percent successful in that challenge, but with the ten men the boys in red and green fought neck to neck with the blue tigers and snatched a valuable point, despite falling behind star footballer Sunil Chhetri’s goal in the first half.

India however dominated the pitch throughout the first half. They were at least 65 percent of the time of ball for possession. During this time they made four shots along the target where Bangladesh had only one on-target shot.

The first scoring opportunity of the match came in front of Bangladesh early in the sixth minute. Left back Yasin Arafat took a long range shot utilizing a pass from Jamal, but it went out of play with left side bar. Bangladesh even failed to utilize the opportunity from the corner in the 21st minute.

Bangladesh also came close of scoring in the 25th minute when skipper Jamal Bhuyan, standing at the D-box, took a right footed shot off a cross from Biplo Ahmed but it also missed the target.

India however found the net in the 26th minute. Udanta Singh with a good run on the right and he found his captain Sunil Chhetri in the middle. Chhetri made no mistakes to send the ball home with a perfect right footed placing shot from close range.

Bangladesh had a chance to level the margin just before the break but Biplo, despite standing at the vantage position, failed to utilize the scoring opportunity off a pass from Saad Uddin.

After resumption, Bangladesh desperately tried to stage a fight back in the match by creating number of scoring opportunities, but failed to convert any lack of proper finishing.

Bangladesh were reduced to ten men in the 53rd minute as defender Biswasnath Ghosh got marching order by the referee for his unsporting behavior during the match.

Yeasin Arafat finally brought Bangladesh in the match in the 73rd minute. Jamal Bhuyan floated a corner from the left side and Yeasin, who was unmarked, sent the ball to the net with a diving header from the close range.

After an equal 1-1 goal margin, the blue tigers became desperate to take the lead again but none of their efforts paid off. Bangladesh also went  attacks with the ball several times in the dying moment but could not convert  any lack of proper finishing and they had to be satisfied with the draw.

Yeasin Arafat, the hero of the day’s match, was given the man of the match  award for his impressive performance in the match.

With the day’s outcome, Bangladesh secured four points from two matches  while India collected one point from one outing.

The boys in red and green will play their third match of the tournament  against hosts Maldives on October 7 before facing Nepal in last match of the  championship on October 13.