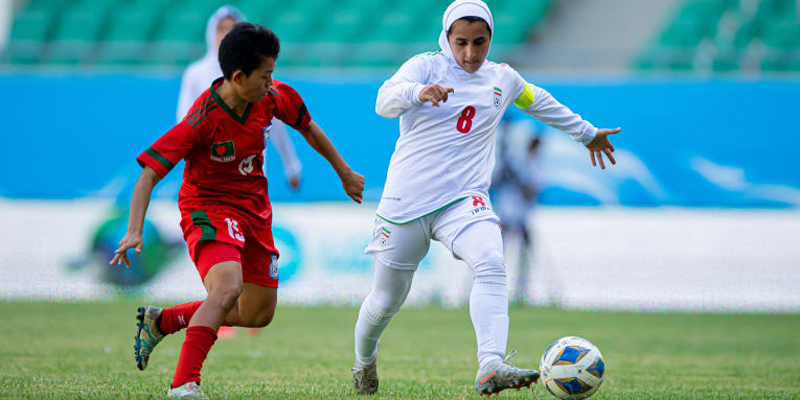 Islamic Republic of Iran are one victory away from qualifying for their first ever AFC Women’s Asian Cup, after defeating Bangladesh 5-0 at Bunyodkor Stadium on Wednesday.

The win brought Maryam Irandoost’s side level with Jordan at the top of Group G, with the winners of Saturday’s clash between the two sides to decide who advances to January’s Finals in India.

Iranian captain Behnaz Taherkhani scored twice from the penalty spot, with Melika Motevalli, Golnoosh Khosravi and Hajar Dabbaghi also finding the back of the net to eliminate a Bangladesh side who had lost their first match 5-0 against Jordan on Sunday.
The last of the nine teams currently in the Uzbek capital to get their qualifying campaign underway, IR Iran burst out of the starting blocks and found themselves ahead within five minutes.

The opening goal came via the unlikely source of Motevalli, with the defender venturing forward to head home following a set-piece when Bangladesh goalkeeper Rupna Chakma misjudged the ball’s flight.

Chakma redeemed herself somewhat when she blocked a backheeled effort from Negin Zandi, but it wasn’t long until Golam Robbani Choton’s side were again brought undone by a set-piece, with Khosravi heading home from close range to double the lead.

The game was quickly slipping out of Bangladesh’s control, and any chance of a recovery disappeared when Monika Chakma was penalised for a handball offence, with Taherkhani powering home the spot-kick to make it 3-0 with barely half an hour played.

A rare shot on target from Bangladesh’s Maria Manda notwithstanding, the game was being dominated by Team Melli Baanovaan, who extended their lead when Dabbaghi scored the game’s best goal – a 20-yard strike which went in off the underside of the crossbar – 10 minutes into the second half.

Another handball penalty was dispatched by Taherkani as IR Iran matched Jordan’s 5-0 win from Sunday with a third of the match still to play, but they struggled to maintain their fluency in the latter stages of the match, while Bangladesh were denied what would have been their first goal of the campaign when Sheuli Azim headed inches wide.
While Bangladesh must now plan for another shot at Asia’s top table in 2026, IR Iran will approach Saturday’s group decider knowing a win against Jordan will seal the biggest achievement in the history of their women’s national team.