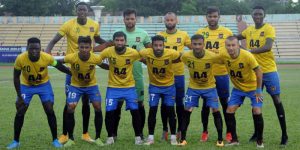 Thanks to Gambian forward Solomon King Kanform, who struck twice to secure Sheikh Jamal’s victory on the day after the match was locked goalless at the breather.

After the barren first half, Solomon King finally broke the deadlock scoring the first goal for Sheikh Jamal Dhanmondi Club in the 52nd minute and he sealed the victory scoring the second goal for his team in the 89th minute of the match.

Sheikh Jamal Dhanmondi Club were reduced to 10 men by the referee as Uzbekistan forward Otabek Validjanov was shown a direct red card in the 90th minute for his unsporting behavior in the match.

With the day’s win, three times league champions Sheikh Jamal Dhanmondi Club secured 52 points from 24 matches while the traditional black and white Motijheel outfit Mohammedan, who finished the league with a losing note, remained at their previous credit of 43 points playing the same number of outings.