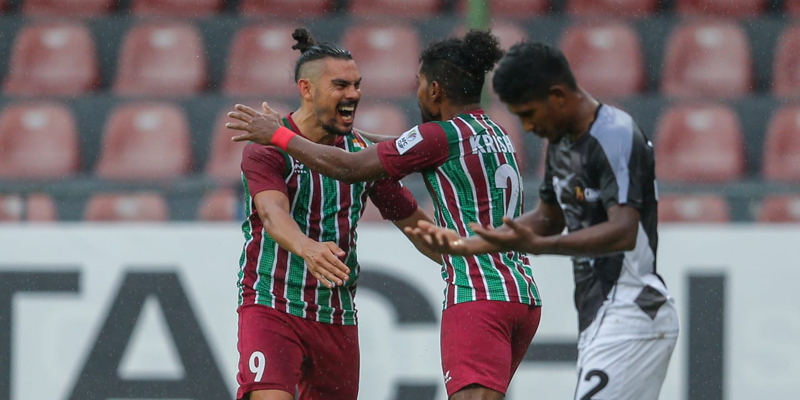 The Australian striker’s 62nd-minute equaliser gave the Indian side the point they needed to advance as Group D winners, setting a clash against the Central Asian zonal champions in next month’s Inter-Zone semi-finals

Bashundhara had looked to be on the way to a momentous victory when Brazilian midfielder Fernandes put them ahead just before the half-hour mark, but the momentum swung in ATK Mohun Bagan’s Sushanto Tripura was sent off in the dying seconds of the first half.

Needing only a point to advance, ATK Mohun Bagan began the match as though they’d only be satisfied with three, and Liston Colaco missed a golden early chance after the run of Williams had dragged the Bashundhara defence and goalkeeper Anisur Rahman out of position.

The Indian side also came close through a spectacular Roy Krishna overhead kick, but it was Bashundhara who struck first when Fernandes punished some overly hesitant defending to cut inside and drill a low 15-yard effort beyond Amrinder Singh at his near post in the 28th minute.

The Bangladesh Premier League champions now had one foot in the knockout stage, but their cause suffered a heavy blow when Tripura was shown a straight red card in first half stoppage time.

Coming at the end of an often-fiery opening period where no fewer than four Bashundhara players, as well as ATK Mohun Bagan’s Pritam Kotal had been booked, Tripura was given his marching orders following an incident in an aerial duel with Subhashish Bose.
Now with an extra man, ATK Mohun Bagan emerged from the interval with a renewed sense of purpose, and they found the all-important equaliser just after the hour mark when the stretched Bashundhara defence failed to track the run of Williams, allowing the Australian to calmly side-foot home Colaco’s pass from 10 yards out.

Williams’ strike put Antonio Lopez Habas’ side back into pole position to advance, but they showed no signs of conservatism, continuing to hunt a winner against their increasingly fatigued opponents, with only the final touch letting them down on several occasions.
Bashundhara’s Robinho nearly turned the group on its head when his speculative curling cross-cum-shot effort bounced into the woodwork with six minutes remaining, but ATK Mohun Bagan held on to claim the crucial point, becoming the first Indian side since JSW Bengaluru FC in 2018 to advance to the knockout stage.

With their Maldives mission accomplished, ATK Mohun Bagan will face either FC Nasaf of Uzbekistan or Turkmenistan’s FC Ahal in the Inter-Zone semi-finals on September 22.