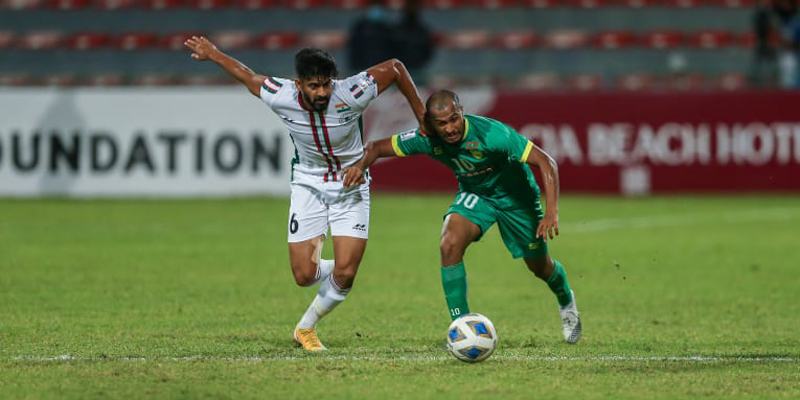 ATK Mohun Bagan of India moved within a point of reaching the 2021 AFC Cup knockout stage after coming from behind to defeat Maziya Sports & Recreation of the Maldives 3-1 in their Group D tie at the National Football Stadium on Saturday.

The result sets up a heated final day encounter between ATK Mohun Bagan and Bashundhara Kings of Bangladesh for a place in the Inter-Zone Semi-final while group hosts Maziya join India’s JSW Bengaluru FC in being eliminated.

The two sides came into the match on the back of contrasting results, with ATK Mohun Bagan having overcome their compatriots Bengaluru 2-0 on Matchday One and Maziya falling on the wrong end of the same result against Bashundhara Kings in their first match.

The hosts opened their account for the campaign after 25 minutes when Cornelius Stewart led a quick counter-attack, embarking on a solo run down the right before crossing for Ibrahim Aisham who swept home Maziya’s opener.

Five minutes later, the Maldives side were close to adding a second in a similar fashion with Stewart again providing the supply down the right, but this time he fed Hussain Nihan inside the box and the latter squared across the mouth of goal for Hamzath Mohamed who fluffed his lines.

Liston Colaco tested the goalkeeper with a well-struck free-kick from 25 yards out as ATK Mohun Bagan chased an equaliser, but Mirzokhid Mamatkhonov was up for the challenge and parried away the effort to keep Maziya in the lead at the break.

The Indian side got their second half off to a flying start as halftime substitute Ashutosh Mehta produced an instant impact, whipping a pinpoint cross from the right for Colaco who met it with a diving header into the back of the net to bring ATK Mohun Bagan level.

Four minutes after the hour-mark, substitute Hugo Boumous executed a fine through-pass, sending Colaco through on goal, but the latter’s attempt was saved by the hosts’ Uzbek goalkeeper, but only as far as the onrushing Roy Krishna who kept his composure to expertly strike on the rebound to give ATK Mohun Bagan the lead for the first time in the match.

France-born Boumous displayed his creative abilities once more with 14 minutes to go, feeding Manvir Singh with an exquisite pass, and the forward made no mistakes with only the goalkeeper to beat, drilling it into the bottom corner to make it 3-1.