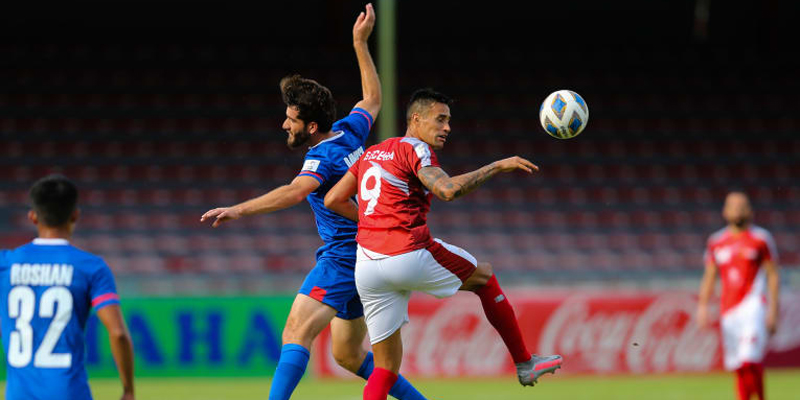 In a match where both sides had enough chances to claim all three points, Rahman and his Bengaluru opposite Gurpreet Singh Sandhu both proved unbeatable, with Bashundhara’s share of the spoils proving far more valuable in the group standings.

The result means Oscar Bruzon’s side, now on four points, can advance to the knockout stage with a win against ATK Mohun Bagan on Wednesday, while Bengaluru could be eliminated as early as tonight if the result of the day’s later match does not fall their way.

Bashundhara came into Matchday Two hoping to build on their opening win over Maziya Sports & Recreation, while Bengaluru had no room for failure following their defeat against ATK Mohun Bagan, and neither side gave anything away in a cagey opening period.

A mazy run from Bashundhara’s Brazilian star Robinho gave a glimpse at the talent the Bangladeshi champions had at their disposal but it was Bengaluru defender Yrondu Musavu-King who had the first real scoring chance of the game when his header was well saved by Anisur Rahman.

Rahman’s opposite Gurpreet Singh Sandhu was called upon for the first time when he kept out a swerving effort from another of Bashundhara’s Brazilians, Fernandes, in the 33rd minute, before Bengaluru forward Bidyashagar Singh lashed a volley over the crossbar at the other end as the first half finished goalless.

The game burst into life with a thrilling sequence in the 56th minute, when Robinho wriggled into the penalty and forced a save from Gurpreet, with Roshan Singh Naroem launching himself to make a looping goal-line clearance before Gurpreet sprung to his feet to make another diving save.

While Robinho was at the heart of all things positive from Bashundhara, Bengaluru looked to Suniil Chhetri for inspiration, and the veteran striker wasn’t too far away from breaking the deadlock when he sent an effort narrowly over the crossbar just after the hour mark.

Bashundhara had been denied in a goalmouth scramble earlier, and it was Bengaluru’s turn to suffer in a drama-filled 74th minute, when a deflected Chhetri strike was kept out by a desperate Anisur save, and the Indian side went even closer when Alan Costa’s header from the resulting corner hammered into the crossbar and onto the goal-line without going in.

With Bashundahra visibly tiring, it took a fabulous low save from the superb Anisur to keep Cleiton’s Silva’s goal-bound effort out with eight minutes remaining, and Danish Farooq’s volley flew high and wide three minutes later to leave Bengaluru’s knockout hopes hanging by the thinnest of threads.