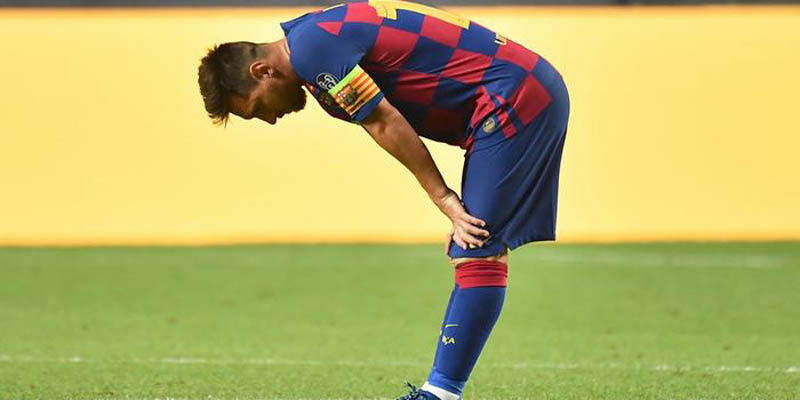 Barcelona confirmed on Thursday night that Lionel Messi is to leave the club after 21 years; Messi ‘shocked’ by news but will now consider other offers; PSG are making progress in talks to sign Messi and believe they have a good chance of completing the deal.

Lionel Messi is said to be “shocked” and “surprised” at the dramatic revelation on Thursday that Barcelona could not re-sign him.

The Argentine is at his home in Barcelona, taking time with his father and agent Jorge to come to terms with what has happened and analyse his options for the future.

On Thursday night, a day after Messi returned to Catalonia following his post-Copa America holiday, Barca announced that Messi is to leave the Nou Camp and conclude his 21-year association with the La Liga giants.

Messi travelled to Barca on Thursday expecting to agree on the details of the announcement of his new five-year deal and discuss preparations for the Joan Gamper trophy game on Sunday.

Messi thought everything was agreed and ready to go forward – but instead he was told it was not possible to register him in line with La Liga financial rules. President Joan Laporta, speaking in a press conference on Friday morning, laid out the deep financial mess that has meant they cannot afford a new contract for the 34-year-old.

Messi wanted to stay at Barcelona and has not considered any other clubs this summer. He has had no plan B.
But Messi and his father are now open again to joining another club and they will begin listening to offers in the coming days.

This is a clear indication that there appears to be no way back for him at Barcelona. Messi became a free agent on July 1 after his previous deal expired on June 30 and Paris Saint-Germain are currently leading the race for the forward’s signature.

PSG are making progress in talks to sign Messi, believe they have a good chance of completing the deal and can afford to sign him without breaking any financial fair play rules.

Barcelona president Laporta says La Liga’s Financial Fair Play regulations prevented the club from offering Messi a new contract, despite the fact that the forward wanted to stay at the Nou Camp.

Messi had agreed terms over a five-year contract extension with a wage reduction of 50 per cent, but the club said the two parties failed to reach an agreement because of “financial and structural obstacles” which prevented the offer from being fulfilled.
Laporta told a press conference on Friday: “The inheritance we have received is awful. The salary mess is 110 per cent of total income of the club. No margin in terms of salary.

“Rules and regulations of La Liga is regulated by financial fair play. We knew we didn’t have any margin when we came in.

“When we got here, the numbers presented after the first conclusions of the audit, those numbers are a lot worse than those exposed initially and those we were working with.

“That means that losses are bigger than what we expected, and what we are spending is more than expected. The current contracts means we have a salary mess of great magnitude. That is why we could not fit in with the first contract agreed with Leo Messi.”
The Spanish football league on Wednesday announced that CVC would inject 2.7 billion euros (£2.3 billion) into La Liga in exchange for 10 per cent of its revenue and a 10 per cent stake in most of its business, with 90 per cent of the injection going to clubs.

However, Laporta said the club could not agree to this deal because of the impact it could have on Barca for the next 50 years.

“The club is over 100 years old and above everyone – coaches, players, presidents – including the best player in the world.”