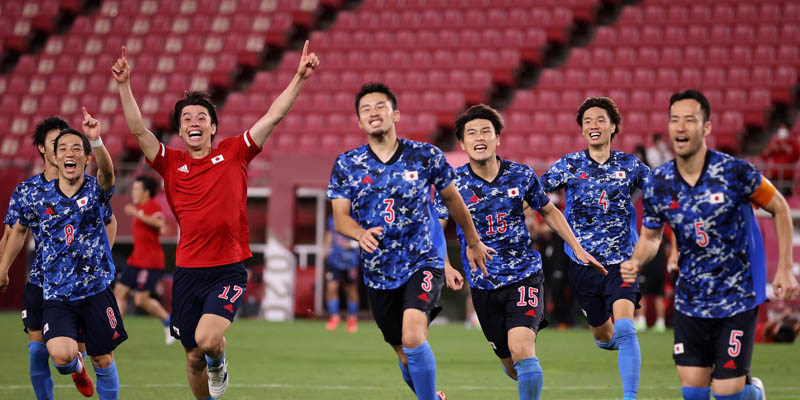 Japan kept their hopes of a medal in the Tokyo Olympics Men’s Football alive on Saturday as Hajime Moriyasu’s side squeezed into the semi-finals when they notched up 4-2 penalty shoot-out win over New Zealand after being held to a 0-0 draw by the Oly Whites to set up a last four meeting with Spain.
Maya Yoshida hit the decisive penalty at Kashima Stadium after Liberato Cacace had seen his spot-kick saved by Kosei Tani and Clayton Lewis had fired over the bar to end New Zealand’s hopes of advancing to Tuesday’s semi-finals.

Moriyasu’s team had been unable to find a way past New Zealand goalkeeper Michael Woud during 90 minutes of regular time and the 30 minutes of extra-time despite dominating possession and controlling the tempo for much of the game.

But Tani’s save in the second round of spot-kicks and Yoshida’s cool-headedness took them to a win they deserved on the balance of play and which should have been assured long before the end of regulation time.
The Japanese assumed control of the game in the early stages and the hosts squandered the chance to take the lead with 10 minutes on the clock.

Takefusa Kubo’s driving run from deep into the heart of New Zealand territory ended with the Real Madrid playmaker slipping a pass through to Ritsu Doan, but his goalward shot was deflected for a corner by Winston Reid.
That set-piece was quickly taken and caught New Zealand sleeping, with Daichi Hayashi thumping a low ball across the face of Woud’s goal but somehow Wataru Endo popped his attempt over the bar from inside the six yard box.

Kubo was again at the heart of Japan’s positive play and he released Doan, only for the PSV Eindhoven man to turn his 31st minute effort wide.
Doan was again off target with 10 minutes remaining in the half when Yuki Soma’s one-two with Kubo allowed the winger to exploit space behind the defence before his teammate’s attempt cleared the bar.

The Japanese were almost made to rue that miss moments later when, on a rare sortie forward, the New Zealanders saw striker Chris Wood shoot over from 10 yards out.
The rhythm of the first half continued into the second 45 minutes, with Yoshida heading off target and Kubo finding Woud’s arms with a shot on the run. Ao Tanaka then thumped his attempt from distance over the bar while Reo Hatate headed Hashioka’s cross from the right off target.

Substitute Ayase Ueda was brilliantly denied eight minutes from time when he steered Doan’s cross towards goal but Woud pulled out a reflex save to push the ball to safety.

New Zealand offered the occasional threat, with Callum McCowatt seeing his low strike ricochet narrowly wide off Takehiro Tomiyasu, before having to be content with taking the game into extra-time.

Woud, however, continued to frustrate Japan, smothering Ueda’s effort before using his legs to keep out Kubo’s shot as the game slid towards penalties and the hosts’ eventual win.