‘If Brazil Win Gold I’ll Get My First Tattoo’ 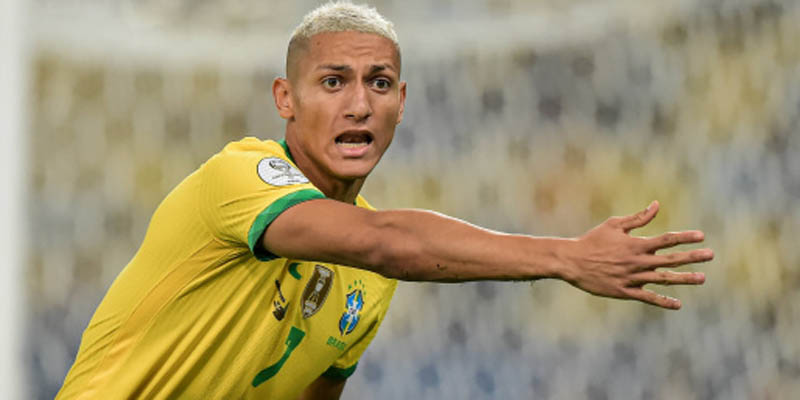 Richarlison was playing video games with his mate in his room when his phone rang. It was to inform him he’d been given a job he’d dreamed about since childhood. He was ecstatic. His mate told him to ring his new boss back and make a daring demand. So, Richarlison nodded affirmatively to Neymar, called Andre Jardine back and requested to wear the Brazil No10 shirt sported by the likes of Rivaldo, Ronaldinho and Neymar himself at past Men’s Olympic Football Tournaments. The Brazil coach granted the wish and his new employee has revelled in the jersey at Tokyo 2002. The competition’s leading marksman speaks to FIFA.com about messages of support from Neymar, chasing a Romario record, Ronaldo’s 2002 FIFA World Cup Korea/Japan™ exploits in Yokohama, a quarter-final against Egypt, what Olympic gold would mean and potentially getting a first tattoo.

FIFA.com: How did you wearing the hallowed Brazil No10 shirt come about?

Richarlison: To be honest, I was going to ask for the No7. I’m the No7 for Everton and the No7 for the senior Seleção. But when I got the call from Jardine, I was playing video games with Neymar in the room. When I put the phone down he immediately said, ‘Now I want to see if you’ve got it in you to carry the burden of being the No10’. We all know the No10 shirt carries extra responsibility – whoever wears it is obliged to be a match-winner. Neymar’s my idol, our idol – I had to obey him. So I asked Jardine for the No10 and he granted me it. Neymar was delighted. Also, Neymar didn’t make this request for nothing. He knows me well, he knows I’ve been playing in Europe for a while, he knows I can carry the responsibility on my shoulders. I think I made the right choice. It’s a huge honour to wear the No10 shirt worn by Neymar, Pele, Ronaldinho, Zico and other legends.

Have you been speaking to Neymar during the competition?

Yes, all the time. He’s always sending good-luck messages, always messaging me after the games. He always talks about the euphoria of winning Olympic gold in Rio, and he desperately wants Brazil to win Olympic gold in Tokyo. Neymar really likes me, I’m one of his best friends in the Seleção. He’s watching all our games and I hope we’re making him proud.

Romario holds the record for most goals by a Brazilian at one Olympic Games. You’re two goals shy of his total from 1988. What would it mean to surpass it?

The most important thing to me is to win a gold medal with my team-mates, regardless of whether I finish as top scorer. But obviously Romario is a legend of world football and a Brazilian idol, so achieving this landmark would give me double the happiness. It would be a very important milestone for me, my family and my team-mates. In little over two months, you have played in four competitions on three continents. Are you crazy, crazy for football or crazy for the Brazil shirt?

I’m crazy for everything! I’m certainly crazy for football and for the Seleção shirt. I gave up my holidays, the chance to spend time with my family to come to the Olympics. it’s been over two years since I’ve properly seen them. Right after the Copa America I went to see them but I only had less than two days. I couldn’t see my mother because she had COVID – I had to stay around 30 metres away, trying to communicate through signals. But wearing this shirt, playing at the Olympics, scoring goals here, making my family proud makes everything worth it.

Do you feel tired?

I’m 24 years old – no! Obviously the campaign was very demanding, but I don’t feel tired. I do what millions of people dream of doing [for a living]. I feel fortunate, not tired. I’ll rest when I retire. In the last match Jardine asked if I wanted to come off and I said ‘no’. Then I scored the two goals. I’m able to rest in the two days between games. The final will be in Yokohama. What do you think about what Ronaldo did there in 2002?

Ronaldo ‘Fenômeno’ made history in Yokohama. When I arrived at the stadium I came across the photos of ‘Fenômeno’ against Germany. They gave me a special feeling, great happiness to see that Brazil became champions and our idol scored goals.

Ronaldo had that famous hairstyle for the Korea/Japan 2002 Final. If Brazil get to the Tokyo 2020 decider, could we see Richarlison with a different hairstyle?

(laughs) Matheus Cunha is our barber here – you’ll have to ask him! I’m not really one to think about messing about with my hair – I go along with my friends. Let’s see what happens if we reach the final.

What do you think of Egypt?

Egypt are a great side. Brazil played them in a warm-up for these Olympic and we lost 2-1. They’ve progressed from a very difficult group. I think it will be a really difficult game. We will have to be fully focussed to be able to score goals and win.

Finally, what would winning Olympic gold mean to you?

Everything. I never imagined myself getting a tattoo, but if Brazil win Olympic gold I am definitely getting one. I would simply have to commemorate the moment. It would mean so much to go down in history.