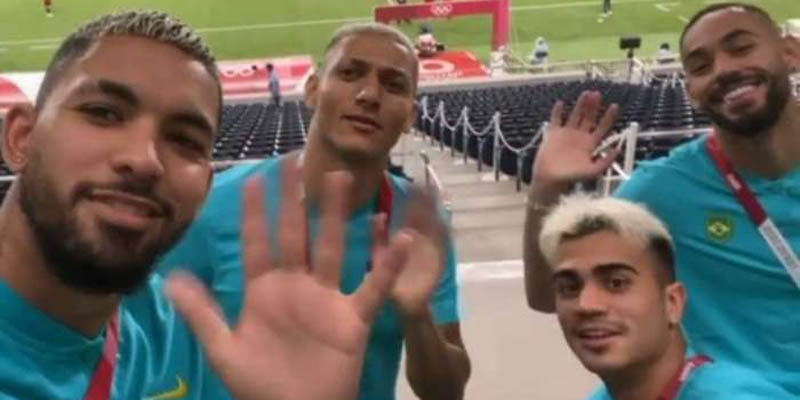 Brazil players decided to have some fun at the expense of their rivals Argentina who crashed out out of the Olympics on Wednesday.

In what was a cheeky gesture, Brazil players bid adieu to their rivals Argentina as La Albiceleste failed to progress from the group stages of Olympics men’s football, currently underway in Japan.

Brazil and Aston Villa midfielder Douglas Luiz uploaded a video on his Instagram story, where he along with teammates Matheus Cunha, Reinier Jesus and Richarlison were seen waving goodbye to the Argentinians.

The Brazilians were present on the stands at the Saitama Stadium in Tokyo were Argentina were playing Spain in their final group game. It was a must-win tie for the South American side in order to progress to the next round but they managed a 1-1 draw.

Mikel Merino had handed Spain the lead in the 66th minute but Argentina’s Tomas Belmonte restored parity in the 87th minute. But that was not enough as Argentina finished third in the group behind leaders Spain and Egypt. They were tied on points (4) with Egypt but the latter qualified for the knock-outs on better goal difference. While Egypt’s goal difference was (+1), Argentina’s was -1.

Earlier in the day at the same venue, Brazil thrashed Saudi Arabia 3-1, courtesy Richarlison’s brace in their final group match to progress to the next round unbeaten.

They scored two goals in three games which were scored by Facundo Medina against Egypt and Tomas Belmonte against Spain and conceded three goals.

Brazil were placed in Group D alongside Ivor Coast Germany and Saudi Arabia. Their campaign began with a 4-2 win over Germany. In their second match, they drew against Ivory Coast but came back strongly in their third game and thrashed Saudi Arabia 3-1.

Richarlison has scored the most number of goals (5) for Brazil and is also the top goalscorer so far in the competition.
Hosts Japan, Mexico (Group A), South Korea, New Zealand (Group B), Spain, Egypt (Group C), Brazil and Ivory Coast (Group D) have progressed to the knockouts. The Selecao face Group C runners-up Egypt in the quarterfinal on July 31 at the Saitama Stadium. If they win the tie, they will face one of South Korea or Mexico in the semifinal on August 3 at the Kashima Soccer Stadium.

The final will be held on August 7 at the Nissan Stadium in Yokohama, Japan.