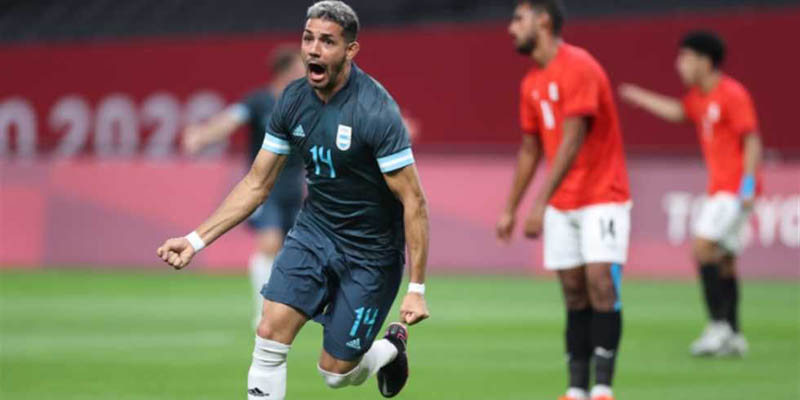 Egypt’s Olympic team lost a goal against Argentina on Sunday in the second round of the group stage of the men’s football tournament at the 2020 Tokyo Olympics.

The Pharaohs made a good run, but in the second half of the confrontation they were hit by a Facundo Medina sting in the 52nd minute, to lose for the first time in the tournament, and Argentina grabbed the first 3 points.

Argentina rose to the rank of the group standings, 3 goals ahead of Australia, which led with 3 points, while Egypt fell to fourth place, with a goal difference from third Spain, with a score of each point.

The Pharaohs started with nine players who participated in the main game against Spain, along with Ammar Hamdi and Salah Mohsen, who took the place of Imam Ashour and Taher Mohamed.

Argentina took control early and revealed its teeth with a shot that was blocked by the left post of Mohamed El-Shennawy’s goal, executed by Adolfo Gaish in the fifth minute.

The Pharaohs responded with a huge opportunity for Ramadan Sobhi, who hit the goalkeeper after Salah Mohsen’s pass in the 13th minute.

The Egyptian attempts continued from the left front and Ahmed Rayan shot, but the defense saved in the 17th minute.

Karim Al-Iraqi shot and had another chance, but he shot wide in the 18th minute.

Ramadan tried again and penetrated the penalty area of ​​the South American champion before passing to Rayan, who shot near the left post in the 22nd minute.

Argentina regained control at the Sapporo Dome, but without much danger to the Egyptian goal.

With the beginning of the second half, coach Shawky Gharib pushed Karim Fouad instead of Karim Al-Iraqi, the right-back.

After an Argentine corner kick, Facundo Medina hit the ball with his head and bounced off the post before firing it into the net, scoring the first goal in the 52nd minute.

The goal is the first for Argentina in the tournament and the first to score against Egypt, the African champion.

Shawky Gharib’s men tried to pressure the Argentines to equalize, and the first made two new substitutions, with Ibrahim Adel and Taher Mohamed replacing Ammar Hamdi and Salah Mohsen in the 60th minute.

Taher hit the crossbar in the 61st minute, and the Pharaohs struggled to threaten goalkeeper Jeremias Ledesma.

Ahmed Fattouh tried with a shot from a distance in the 72nd minute, but the Argentine defense saved it.

In a fourth change for Egypt, Nasser Maher entered instead of Osama Galal in the 79th minute, hoping to decipher the Latin defense.

Ramadan started from the left front and managed to get a free kick close to the penalty area in the 86th minute.

Ramadan took the kick and Ibrahim Adel followed it with his head, but it touched a player from Argentina before it became a corner kick.

And the Pharaohs got a free kick in the 88th minute, and Ramadan took it, but his ground shot went easy to the Argentina goalkeeper.

The Argentine steadfastness continued in front of weak Egyptian attempts to seize the men of coach Fernando Batista, a valuable victory.

Soon, Australia will play Spain in the same group.

While in the last round, Egypt will play against Australia at 1 pm on Wednesday, and Argentina will face Spain.