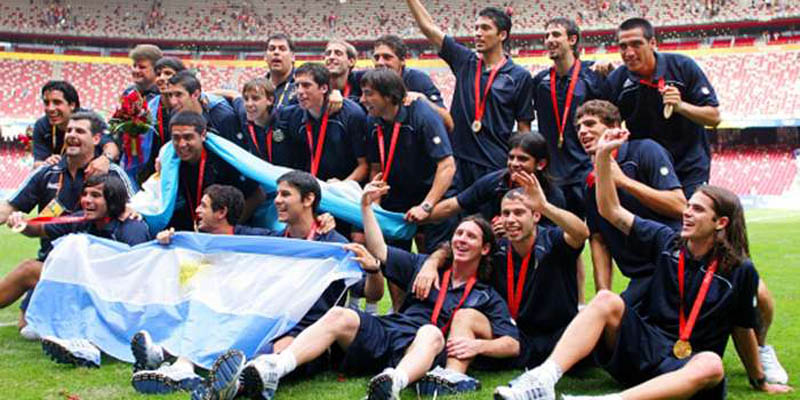 Stars like Sergio Aguero, Angel Di Maria and Javier Mascherano were part of that Argentina side at the 2008 Olympics…
Lionel Messi’s first success with Argentina, albeit the U23 side, came at the 2008 Beijing Olympics when the Albiceleste defeated Nigeria 1-0 in the final to win the gold medal.

The Barcelona star had scored two goals in the tournament as La Albiceleste every single match in the competition including a thumping 3-0 win over Brazil in the semifinal to bag the gold.

Along with Messi, there were players like Sergio Aguero, Angel Di Maria and Ezequiel Lavezzi who went on to have illustrious careers.
Star Argentine midfielder Juan Roman Riquelme was one of the three players in the team who exceeded the age limit. Here were take a look at the Argentina squad from Beijing Olympics and where are their members now.

Oscar Ustari played in Spain for Getafe for five seasons at the beginning of his career before moving to England for a season where he played for Sunderland. He has also played for Argentine giants like Boca Juniors and Newell’s Old Boys. Ustari represented the senior national team in two international matches

Sergio Romero (GK)
Sergio Romero, who was Argentina’s first-choice goalkeeper at the Olympics, went on to play 96 international matches for the senior team. Romero, currently a free agent, was with Manchester United for six seasons from 2015 to 2021.

Nicolas Navarro (GK)
Nicolas Navarro, currently a goalkeeper for Arsenal di Sarandi, never played for the senior national side and has been playing club football in Argentina for the majority of his senior professional career.

Ezequiel Garay (DF)
After playing at the Olympics, Garay moved to Real Madrid where he spent three seasons before joining Benfica. He retired from professional football in 2020 after spending four seasons at Valencia. Garay was also a part of the Argentina side which reached the World Cup final in 2014.

​Fabian Monzon (DF)
Monzon spent most of his professional career in South America after playing at the Olympics. He currently plays for Argentine club Atletico Tucuman.

​Pablo Zabaleta (DF)
After the Olympics, Zabaleta joined Manchester City where he spent the better part of his career and became a legend at the club. He left City in 2017 and spent the final three seasons of his professional career at West Ham United. He retired in 2020.

​Federico Fazio (DF)
Fazio was playing for Sevilla when he won the Olympics gold medal in 2008. He later moved to Tottenham Hotspur and currently plays for AS Roma in Serie A.

​Nicolas Pareja (DF)
Pareja spent most of his professional career in Spain playing for Espanyol and Sevilla. He retired in 2019 while playing for Mexican club Atlas FC.

​Fernando Gago (MF)
Gago played for Real Madrid from 2007 to 2012 and later moved to Valencia. The defensive midfielder retired from professional football in 2020.

​Ever Banega (MF)
The central midfielder played in Spain at Valencia, Atletico Madrid and Sevilla for the most parts of his professional career. Banega has so far played 65 international matches representing La Albiceleste. He is currently playing for Al Shabab in Saudi Arabia.

​Juan Roman Riquelme (MF)
An all-time great in Argentina football, Riquelme, at the age of 30, captained the gold medal-winning Argentina side at the Beijing Olympics. The midfielder retired from football in 2015 after playing for Boca Juniors.

​Javier Mascherano (MF)
Javier Mascherano went on to become one of the greatest Argentina players of all time. The defensive midfielder played for Liverpool and FC Barcelona in his career and was the highest-capped Argentine footballer until 2021 when Lionel Messi surpassed his tally of 147 matches at the Copa America 2021.

​Angel Di Maria (FW)
After the Olympics, Di Maria played for European giants like Real Madrid, Manchester United and PSG where he is playing right now. Most recently he came into the limelight after scoring the winning goal in the final of Copa America against Brazil which helped Argentina securing an international trophy after a gap of 28 years.

​Sergio Aguero (FW)
Aguero was playing for Atletico Madrid when he won the Olympic gold medal. He later moved to Manchester City in 2011 and played for 10 seasons. He is widely regarded as the greatest ever player to have donned the Man City jersey. He is also the club’s all-time highest goalscorer (260). Aguero has just joined Barcelona after leaving Man City on a free transfer.

Lautaro Acosta (FW)
After playing at the Olympics, it took Acosta nine years to get a senior national team call-up when Jorge Sampaoli called him to the national team for the 2018 World Cup qualifiers. He currently plays for Argentine club Lanus.

​Ezequiel Lavezzi (FW)
Lavezzi was playing for Italian side Napoli when he played at the Olympics. But it was in 2012 that he came into prominence after joining PSG. Lavezzi was an integral part of the Argentina team that finished runners-up at the 2014 World Cup. He retired from football in 2019.