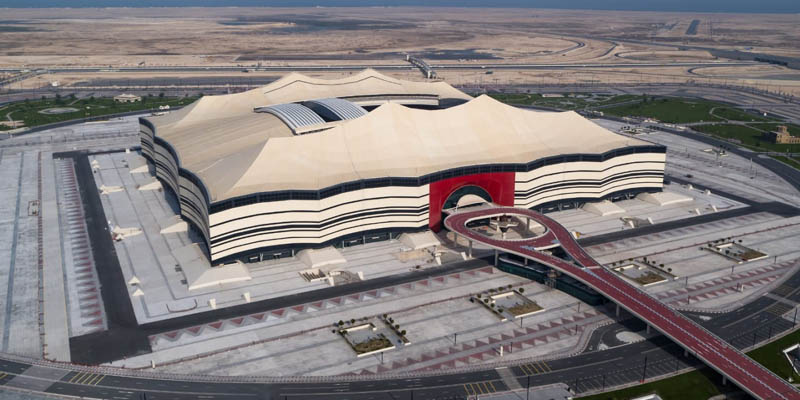 There are only 500 days to go until Qatar hosts the first FIFA World Cup™ in the Middle East and Arab world. The 22nd edition of the tournament will kick off on 21 November 2022, when Qatar – the reigning champions of Asia – take their FIFA World Cup bow at the tournament’s first match at the stunning 60,000-seat Al Bayt Stadium in Al Khor City.

Qatar will host the most compact version of the tournament in modern history. All eight stadiums are within 50km of central Doha, while fans, players and officials will be able to stay in one accommodation throughout the event, which will conclude with the final at the 80,000-seat Lusail Stadium on 18 December 2022 – which is also Qatar National Day.
It promises to be a festival of football like no other – with everyone always in the thick of the action and never far from a stadium, fan zone or tourist attraction. Nasser Al Khater, CEO of the FIFA World Cup Qatar 2022 LLC, spoke of his country’s pride at hosting the biggest single-sport event in the world.

“Five-hundred days to go means we’re getting very close,” said Al Khater. “It’s been 10 years in the making and this will be the biggest event that’s ever happened in the Middle East. It will bring the region together and be a moment of pride in the history of the world. As we move closer to the tournament, we are sure the excitement is going to build even further.”
Al Khater went on to say he believes the compact tournament footprint is one of Qatar’s unique selling points for fans as they begin planning their trips to the country.

“The compact nature is probably the most positive aspect of this World Cup,” said Al Khater. “For fans, they won’t have to follow their team from city to city, which means there will be a significant cost saving and means they will have time to take in the ambiance and enjoy what Qatar has to offer.”
The SC’s Yasir Al Jamal, Vice Chairman, Technical Delivery Office, and Chairman, Operations Office, said Qatar’s FIFA World Cup infrastructure projects had reached 95% completion, with all the stadiums set to be ready by the end of the year.

“Since 2011, we’ve been working hard on the delivery of our tournament and national infrastructure. If we look at the metro, the airport and highways expansion, we’re in a very good place. All the stadiums will be ready by the end of the year, which gives us a whole year to test them before the event.

“Five of our stadiums have been completed, while the other three will be ready soon. Six of the stadiums will be used for the FIFA Arab Cup 2021, which will take place in November and December.”
Involving 16 teams from across the region, the FIFA Arab Cup 2021™ will take place exactly a year before Qatar 2022. It will provide a vital opportunity to test infrastructure and operations while giving fans a taste of the region’s passion for the beautiful game.

“It’s an important event for us,” said Al Khater. “It will bring the Arab world together for an important tournament – held under the FIFA umbrella for the first time. It’s going to be a great opportunity to see the new stadiums in action and prepare ourselves for Qatar 2022.”
Al Khater also outlined Qatar’s legacy commitments – particularly in relation to stadium developments.

“From the very beginning, legacy has been at the forefront of our minds – with our plans factored in during the very early design phase. Some stadiums will have their capacities reduced, with the seats donated to aid the development of sporting infrastructure in other countries. Some stadiums will be repurposed, while one [Ras Abu Aboud] will be completely dismantled, with its parts used to create facilities in Qatar and overseas.”