The Azzurri are inspired by a rock-hard defence 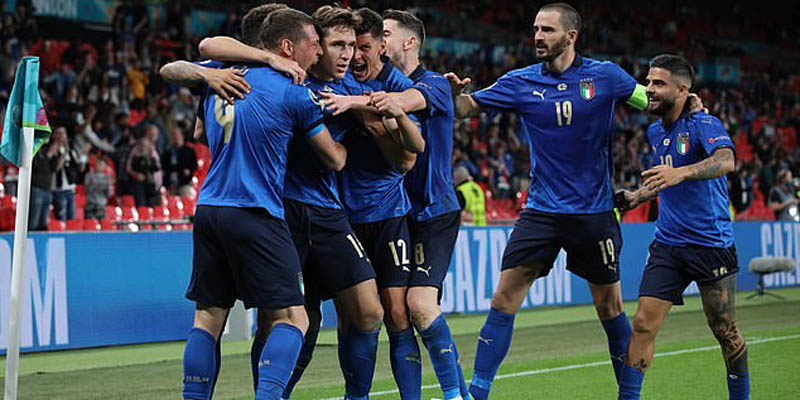 Can Italy win the Euros after 52 years of waiting? This is the recurring question these days, especially in Italy where it is forbidden to talk about winning the competition due to superstition.

But it is possible to continue dreaming after the Azzurri’s victory against Belgium. There are many reasons and possibilities to finally see Italy triumph in the tournament after so many years of waiting.

Roberto Mancini’s side are performing superbly given their rawness at international level: none of the players called up by the Italy boss, with the exception of Leonardo Bonucci, Jorginho, Marco Verratti and Giorgio Chiellini, have ever won a major trophy at club or international level.
Meanwhile, 24 out of the 26 players have never participated in a major tournament before and many players like Nicolo Barella, a positive revelation at Euro 2020, are on their first great international adventure with the Italian national team.

Ahead of Tuesday night’s do-or-die semi-final with Spain on Tuesday night, these are the key characteristics of Mancini’s men…
While there are several new faces in this Azzurri side, this Mancini team has a very traditional element to it: a rock-hard defence.

Italy have only conceded twice in this European Championship so far and none of them from open play. At the heart of their backline is the legendary centre-back duo of Bonucci and Chiellini, who have been described by Bastian Schweinsteiger and Alan Shearer as the best defensive tandem in Europe.

The pair have been playing together for 11 years and know all of the best defensive moves by heart, thereby making Italy’s defense watertight.

Italy captain Chiellini revealed that his relationship with Bonucci is on the verge of telepathic but also paid tribute to the other defenders available in the squad.

He told a pre-match press conference: ‘Bonucci and I have been playing together for many years and it is normal that we have a special feeling.
‘We don’t even need to look each other in the eyes to understand what to do. But the other defenders are also strong. (Francesco) Acerbi has always played well, (Rafael) Toloi, even (Alessandro) Bastoni, (Giovanni) Di Lorenzo is strong. We are a proper group.’

Meanwhile, (Gianluigi) Donnarumma has finally become a defence leader in goal and is making his vocal presence known on the pitch.

After six years as a starter at AC Milan, his experience in Serie A has been fundamental and his displays at the European Championships so far show that Paris Saint-Germain have signed the best goalkeeper under the age of 23 in the world.

Andrea Bocelli started the Euros with a passionate rendition of ‘Nessun Dorma’ but this Italian side has three tenors itself – Verratti, Jorginho and Barella.

The trio’s strengths are clear: they run, fight and above all they contribute to the attack with direct, vertical passes capable of breaking through the lines and putting any kind of defence in difficulty.
Verratti has finally managed to find the best role for his qualities, playing as a hybrid winger in order to free up more space for Jorginho, fresh off the back of a Champions League final victory with Chelsea.

Barella, meanwhile, is a modern midfielder who knows how to give assists and protect the ball from his opponents using dynamism and strength, who can run constantly for 90 minutes.

The Inter Milan midfielder is the nucleus of a brand new midfield that is more harmonious than in recent history – despite the likes of Andrea Pirlo, Daniele De Rossi and Thiago Motta retiring from international duty in recent years.

Barella is set to be a big name on the international stage and Inter are now trying to hurry him towards a new five-year contract – with the 24-year-old billed as a potential captain of the club in the future.