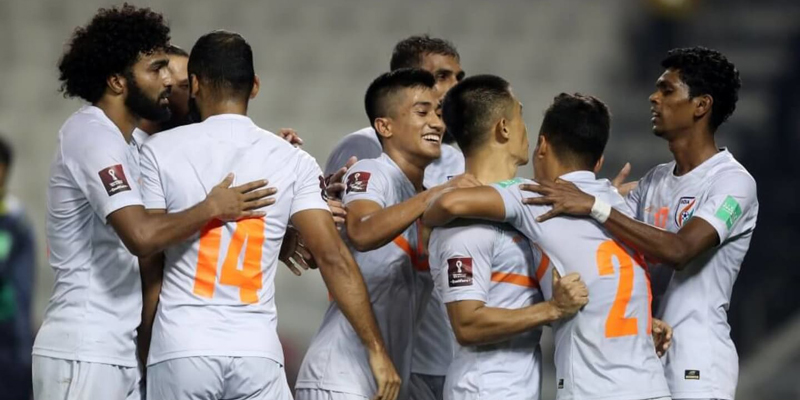 Sunil Chhetri struck twice in the closing minutes as India boosted their hopes of sealing a place in the third round of the Asian Qualifiers for the AFC Asian Cup China 2023, with the India captain taking his tally to 74 international goals – above Argentina’s Lionel Messi and one off entering world football’s all-time top 10.

ndia looked more threatening at the start against a Bangladesh side who were playing with Rakib Hossain as a lone striker and the Blue Tigers should have done better in the seventh minute when Bipin Singh wasted an opportunity off Brandon Fernandes’ corner.

Bangladesh, who came from behind to claim a 1-1 draw against Afghanistan on Thursday, got into the action a minute later after Md Rahmat Mia’s long throw-in was flicked on by Hossain inside the danger area but an under pressure Tariq Kazi couldn’t control the ball.

India wasted a golden opportunity to get ahead in the 14th minute when Fernandes sent an intelligent pass to Manvir Singh down the left flank but the forward gave the ball away cheaply in the final third.

Bangladesh goalkeeper Anisur Rahman was called into action three minutes later when he made a save following Suresh Singh’s close range effort after a swift attacking move which was started by Chinglensana Singh down the centre.

Bangladesh continued to flirt with danger as India tried their best to break the deadlock with Fernandes proving to be a thorn in Jamie Day’s side with his intelligent runs in the final third.

India tightened their grip on the match and almost scored in the 35th minute but Chinglensana Singh’s powerful header off Fernandes’s corner was cleared off the line by Riyadul Hasan Rafi as the teams remained level going into the break.

Igor Stimac’s chargers continued to attack in numbers at the resumption of the second half and should have done better in the 55th minute when Sandesh Jhingan could not find the target after his header off a Fernandes’ corner was deflected into the path of Rahman.

Fernandes, who impressed in their 1-0 defeat of Qatar, was in the thick of action again in the 62nd minute when he delivered a perfect cross from a set-piece into the path of Sunil Chhetri, but the India captain fired his header wide.