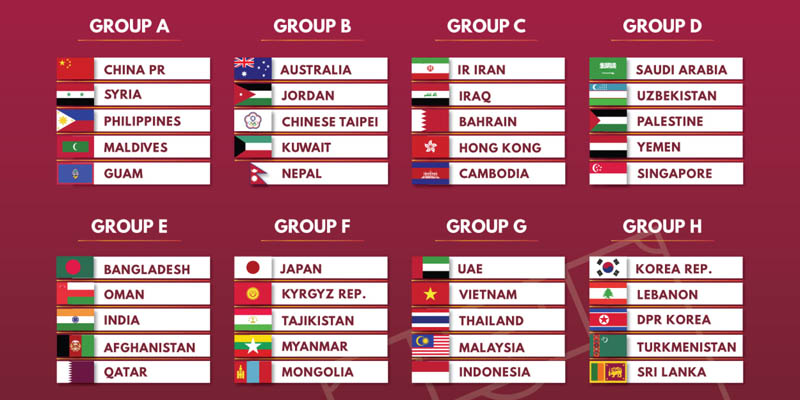 All eyes across Asia will be on the continent’s second round of qualifying for 2022 FIFA World Cup Qatar™ which resumes on Friday after an 18-month delay due to Covid-19.

39 teams will compete across 57 matches from 28 May to 15 June for a place in the next round. With safety and health remaining the top priority, each group will be staged in a centralised venue. Up for grabs is progression to Round 3 as either a group winner or as one of the four best runners-up.

This match is likely to be pivotal as both teams chase the automatic qualifying spot for Group C. IR Iran, Asia’s second highest-ranked side, are surprisingly found languishing in third after four outings – Team Melli are trailing leaders Iraq and hosts Bahrain by five and three points respectively. Despite having a game in hand, IR Iran’s new boss Dragan Skocic is all too aware that his side can’t afford to drop further points.

The two sides’ historic rivalry adds another layer of intrigue to this showdown. Two decades back, Bahrain drew away and won at home to end IR Iran’s campaign for Korea/Japan 2002. Four years later, the Iranians took revenge with four points against the Bahrainis as they booked passage to Germany 2006. IR Iran will be looking to the goal-scoring form of Karim Ansarifard and Sardar Azmoun, while Bahrain boast the talents of Czech-based striker Abdulla Yusuf Helal and Mahdi Al Humaidan – the latter earning the penalty which yielded the only goal in the pair’s first-leg meeting.

In Group A, with runaway leaders Syria likely to win the section, China PR are left to compete for second place against the Philippines and Maldives. Team Dragon, under new coach Li Tie, have a game in hand and can count on home advantage as they aim to progress.

The same can be said of Group B’s Kuwait who, playing as hosts, will be hoping to mount a serious challenge for top place. Frontrunners Australia, however, will look to the red-hot form of striker Jamie Maclaren and new face Harry Souttar to reproduce their previous form which saw them keep a perfect record with four wins from as many starts.

Group D leaders Saudi Arabia enter the campaign aiming to consolidate their place at the summit. However, the home team will be wary of second-placed Uzbekistan, who will look to the goal-scoring form of top-striker Eldor Shomurodov to turn the table in the two sides’ meeting in the closing matchday. In Group E, with hosts Qatar granted automatic qualification, second-placed Oman enter the campaign aiming to progress as section winners.

In Group F, Japan coach Hajime Moriyasu has called up several European-based stars, including captain Maya Yoshida and Hannover 96 attacker Genki Haraguchi, as they seek to round off their campaign with an unblemished record. Sitting at the top with a five-point cushion, the Samurai Blue can seal early progression with three points against Myanmar regardless of other results.

In contrast, the competition in Group G looks quite open with four teams contending for the automatic qualifying spot. Leaders Vietnam arrive in Dubai hoping to strengthen their place at the top but hosts United Arab Emirates, despite sitting in fourth, have a game in hand and can count on home advantage and striking-ace Ali Mabkhout to put themselves back into contention.

With Korea DPR’s withdrawal, Group H becomes a three-way battle between leaders Turkmenistan, Korea Republic and Lebanon. Despite trailing the Central Asians by a point, the Taegeuk Warriors, with a game in hand, can look to their star-studded line-up captained by Son Heungmin as they seek to win the group and advance automatically.