No Real Madrid players included in in Spain Euro squad 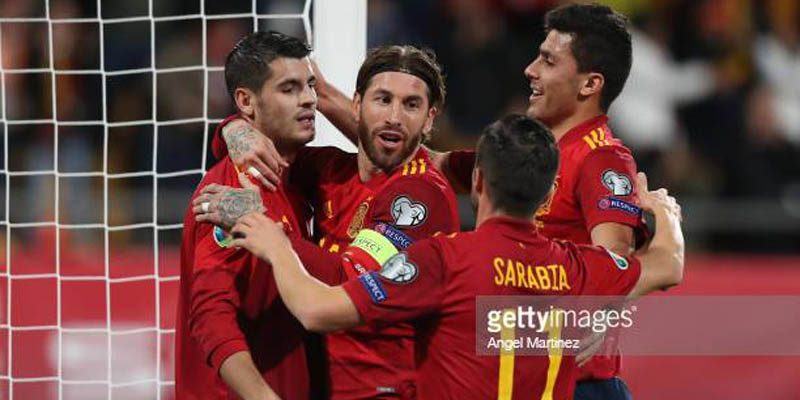 CADIZ, SPAIN – NOVEMBER 15: Alvaro Morata of Spain celebrates with teammates after scoring his team’s first goal during the UEFA Euro 2020 Qualifier between Spain and Malta on November 15, 2019 in Cadiz, Spain. (Photo by Angel Martinez/Getty Images)

Spain’s captain Sergio Ramos has been left out of the squad for this summer’s Euro 2020 tournament by Luis Enrique. Ramos won the last of his 180 caps in March but his season at Real Madrid has been blighted by injury.

Aymeric Laporte has been included in a 24-man squad that includes no Real Madrid players, after he was cleared this month to switch nationality. The Manchester City defender was born in France and has represented that country at various age-group levels but is entitled to Spanish citizenship.

“I’ve not included Ramos because he’s not been able to play much this season,” Enrique said. “Especially since January he’s not been fit enough, and at times not even training with the group at his club.

“It wasn’t easy, but I called him last night [Sunday] and we had a difficult and tough conversation. I feel bad as he’s a player who has always been at the top level and has a future with the national team. It’s a decision that I’ve taken for the good of the national team and the group as a whole.”

Adama Traoré and Eric García, who like Laporte has not been a first choice for City this season, have been selected. There was also a surprise recall for Chelsea’s César Azpilicueta, who won the last of his 25 caps in 2018.

Ramos missed most of the second half of the season after a series of muscle injures and a knee problem that required surgery. He has been limited to 15 La Liga appearances and only five games in all competitions in 2021 – the last of which came against Chelsea on 5 May. He would have entered the Euros with a chance to break the international appearance record held by Egypt’s Ahmed Hassan with 184.

Ramos tweeted: “I have fought and worked every day, in body and soul, to be able to reach 100% for Real Madrid and the national team but things don’t always work out the way we’d like.

“It pains me not to have been able to help my team more and not to play for Spain but, in this case, the best thing to do is rest, fully recover and come back next year like we’ve always done. It hurts not to represent your country, but I have to be honest and sincere. I wish all my teammates the very best of luck and I hope we have a great Euros. I’ll be another fan cheering on from home.”

Ramos’s club-mate Dani Carvajal missed out through injury and the squad contains only three Barcelona players and two from La Liga’s champions, Atlético Madrid. The Atlético midfielder Marcos Llorente was included as a full-back.

Athletic Bilbao’s defender Iñigo Martínez said he had asked to be left out because of “not being physically or mentally at the level required”.