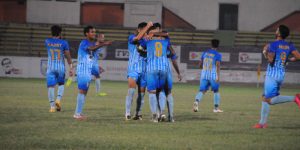 Rakib put Chittagong Abahani ahead in the 18th minute but their lead did not last long as Okoli restored the parity for Saif scoring a from a penalty in the 27th minute of the match from a penalty.

After resumption, Rakib again put Chittagong Abahani ahead scoring his second goal in the 47th minute while Nixon further widened the margin scoring the third goal for Chittagong in the 50th minute of the match.

Didier Brossou joined the party scoring the fourth goal for Chittagong Abahani in the 64th minute while Okoli pulled one back scoring his second goal for Saif in the 68th minute.

Chittagong Abahani Limited dominated the proceeding, especially in the second half, and notched their deserving victory while Saif Sporting Club offered some resistance in the first half but they failed to keep the tempo in the second half.

The day’s win saw, the port city team Chittagong Abahani Limited moved up sixth position with 25 points from 15 matches while the Federation Cup runners-up Saif Sporting Club remained at their previous credit of 23 points playing the same number of outings.

Earlier, Chittagong Abahani Limited lost to Sheikh Jamal Dhanmondi Club 1-3, but they bounced back to register a 1-0 goal victory over Arambagh Krira Sangha while Saif SC played goalless draw with Rahmatganj Muslim Friends Society and suffered a 1-2 defeat to Mohammedan Sporting Club Limited in their respective previous second round matches.