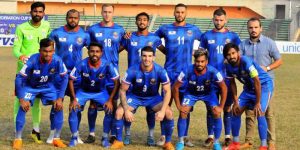 In the day’s match, forward Mohammad Jewel scored a brace for Police while Uzbekistan defender Saiddoston Fozilov netted a lone goal for Baridhara. All the goals came in the second half after both the teams failed to break the deadlock at the breather.

After the barren first half, Uzbekistan defender Saiddoston Fozilov broke the deadlock putting Baridhara ahead in the 63rd minute from a penalty, but Jewel brought Police in the match to restore the parity in the 75th minute of the match.

Jewel however sealed the victory scoring his second goal for Bangladesh Police FC in the 87th minute of the match.

Police FC came to the field in the second half with more orgainsed way and notched their day’s victory while Baridhara were off-colored on the day ,except the day’s lone goal.

With the day’s win, Bangladesh Police Football Club secured their fourth wins in the league with 16 points from 15 matches while Uttar Baridhara Club remained at their previous credit of nine points playing 14 outings.