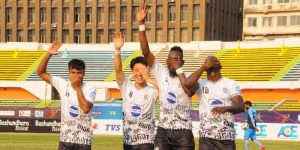 In the day’s match, Diabate opened an account scoring the first goal for Mohammedan in the 9th minute but Mohammedan could not keep the lead when their midfielder Habibur Rahman Shohag scored a own goal in the 46th minute of the match bringing Arambagh in the match.

As the match was heading for a tame draw, it was Diabate who rescued Mohammedan from total embarrassment scoring his second goal in the 90+2nd minute of the match.

The day’s win saw, the traditional black and white Motijheel outfit Mohammedan improved their tally with 22 points from 13 matches while bottom-ranked Arambagh KS remained at their previous credit of one point playing the same number of matches.

Both the teams launched attacks and counter attacks in the whole ninety minutes but failed to convert any of those into a goal.

Probably more drama remained in the dying moment of the match as it was Ashraful Islam who secured full three points scoring the all-important goal for Sheikh Russel in the 90+4th minute of the match.

With the victory, Sheikh Russel KC improved their tally with 23 points from 13 while Brothers Union Club remained at their previous credit of five points playing the same number of outings.