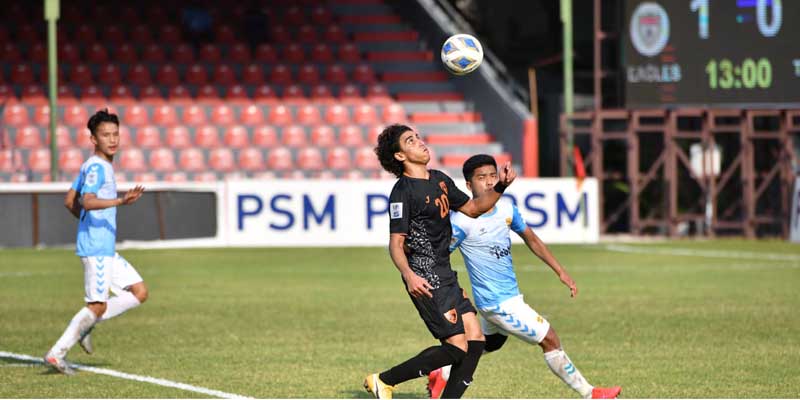 Goals from Hassan Raif Ahmed and Mohamed Naim proved decisive as Club Eagles of the Maldives eliminated Bhutan’s Thimphu City with a 2-0 win in the 2021 AFC Cup Preliminary Stage on Wednesday.

Raif Ahmed opened the scoring in the ninth minute, but the hosts had to withstand a second-half recovery from Thimphu before Naim confirmed his side’s progress with a superb late free-kick.

The result extends Club Eagles’ bid to qualify for the group stage, with another sudden death tie against Abahani Limited Dhaka of Bangladesh to follow next Wednesday, while Thimphu’s continental campaign is over as quickly as it begun.

Club Eagles had to do without Russian forward Vladislav Kormishin, who was a late withdrawal from the Matchday squad, but his absence didn’t appear to bother the hosts in the early exchanges, with Raif Ahmed firing them ahead within nine minutes.

The breakthrough materialised after a Club Eagles attack breached the right side Thimphu’s defence, with Raif Ahmed on hand to slam the ball home from eight yards after getting onto the end of a scuffed initial effort from El Sayed Mahmoud.

Thimphu struggled to carve out a foothold in the early stages, finding themselves pushed back in their own half for much of the first half, but fears of a one-sided contest receded as the visitors grew in stature defensively throughout the opening period to remain within striking distance.

The visitors then created their first real scoring chance in the 41st minute, but Orgyen Tshering sent a lobbed effort over the crossbar from 25 yards when Club Eagles goalkeeper Mohamad Taha was caught out of position after coming for a cross.

With no improvement on their 1-0 lead at the interval, Club Eagles resumed their hunt for a second goal, but came no closer to adding to their lead in a period where Raif Ahmed saw a speculative effort blocked by Tenzin Norbu.

But the intensity lifted when Imran Nasheed drew a fine low save from Thimphu’s Ngawang Jamphel in the 66th minute, and Club Eagles survived a close call of their own at the opposite end of the pitch a minute later as what had been a tight match began to open up.

A succession of Thimphu corner kicks provided their best chance of the match in the 77th minute, but Norbu squandered the opportunity when he headed the loose ball over the crossbar from only a few yards out with Taha off his feet and out of the equation after misjudging the ball in.

That miss would prove costly when Naim slammed home a free-kick from the right-hand edge of the penalty area in the 89th minute, giving Jamphel little chance with a sweetly struck left-footed effort which put Thimphu’s brave bid to force extra-time to bed once and for all.