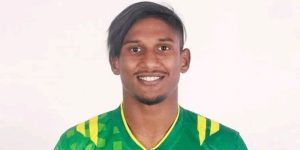 Bangladesh team received a big jolt, as dependable defender Biswanath Ghosh suffered a big muscle injury during the Bangladesh-Kyrgyzstan opening match of the Tri-nation Cup held on Tuesday last Tand he will not be able to part of the Bangladesh’s next match against Nepal.

Team manager Iqbal Hossain through a video message today informed that: “Biswanath suffered injury during the yesterday’s match and our doctor and team physio gave him a primary treatment at the that time … today we sent him to the medical for MRI and we received the report where a big injury was found in his muscle.”

“The injury will now take at least two weeks to recover so the team management took the decision to send Biswath at home tomorrow for his better treatment,” said Iqbal.

Asked whether there are any plan to bring any player from Bangladesh in replace of Bishwanath, Iqbal said they have already confirmed their 23-member squad in the managers’ meeting held on March 22 so there is no scope to include any player in the squad at the moment.