Scotland to stand against racism before Austria qualifier 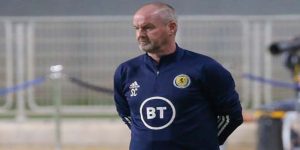 Scotland’s players will stand against racism rather than take the knee ahead of their World Cup qualifier against Austria.

Several Scottish Premiership teams including champions Rangers and their Glasgow rivals Celtic opted not to take the knee before their games last weekend.

Rangers, Celtic, Dundee United and Motherwell all stood before kick-off after deciding that was a more appropriate way to call for action and change.

Scotland will do the same in Thursday’s opening World Cup qualifier at Hampden Park.

The gesture was originally started last year to express support for the Black Lives Matter movement following the death of George Floyd at the hands of a white police officer in the United States.

“I think recent events and past events tell you that you have to keep changing people’s mindsets and reminding them,” Scotland manager Steve Clarke said on Monday.

“The knee, when it was first taken, was a really powerful symbol. It has maybe become a little bit diluted.

“There have been some high-profile cases recently and the abuse is still there, and it’s not acceptable.

“Maybe just taking a stand, as opposed to taking a knee, will just waken everyone up.

“If we go to sleep, it will never go away, we have to keep confronting it and pushing forward, and making sure in years to come racism of any form is not acceptable.”