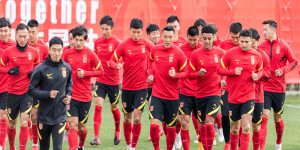 China PR have hit the ground running in their two-week training camp, and head coach Li Tie is hoping his charges stay focused ahead of the Asian Qualifiers for the FIFA World Cup Qatar 2022 and AFC Asian Cup China 2023.

China PR are second in the Group A standings with seven points to their name, eight behind Syria but with a match in hand.

“To better prepare for the Asian Qualifiers, we have arranged two warm-up matches with Henan and Shandong, who will play like China’s opponents – Philippines and Syria.”

Several players, including star striker Wu Lei, have skipped the camp due to club commitments but Li Tie said he still has a highly motivated group of players at his disposal.

“This is the situation that all teams will encounter. It’s also part of football. We need all the players to be prepared as nobody knows who could participate with a good physical condition.

“We are also keeping in touch with Wu Lei. We’ve invited him to the social media group of the national team in every training camp to make him feel that he is an important member of the team even though he’s in Spain. I hope Wu Lei can return as planned.

China, who will host the remaining Group A fixtures, are set to resume their Asian Qualifiers campaign against Maldives on June 3, before playing the Philippines four days later with Guam and Syria to follow on June 11 and 15 respectively.

“We are really excited to play on home soil, and I hope that more fans will come to cheer us.”