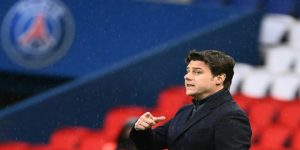 Paris Saint-Germain head to Lyon on Sunday for a pivotal game in the Ligue 1 title race with Mauricio Pochettino’s side having been thrown off course by poor performances and off- field troubles.

PSG were stunned at home by struggling Nantes last weekend, a 2-1 defeat at the Parc des Princes condemning the reigning champions to back-to-back home league losses for the first time since November 2012.

They could have gone top of the table with a win, but instead they remain second with nine games remaining, three points behind leaders Lille and ahead of third-placed Lyon on goal difference.

The Nantes defeat was overshadowed by the news that two PSG players, Angel Di Maria and Marquinhos, were the victims of break-ins during the game itself.

Di Maria was substituted after it emerged his home in the upmarket Paris suburb of Neuilly-sur-Seine had been burgled while his family were there. Meanwhile, the family home of Marquinhos was also burgled in another Paris suburb while his father and two sisters were present.

“What happened has affected everybody,” admitted Pochettino.

“Everyone took it as though it had happened to them personally. We don’t know how things might have gone had these incidents not occurred, but Angel is fine and so is ‘Marqui’.”

Di Maria previously admitted that an attempted robbery on his family’s home during his one year at Manchester United, in 2014/15, had left him keen to leave England.

However, the 33-year-old has been settled in France and only last week signed a contract extension to keep him at PSG until the end of next season.

“My family and I are very happy here and nothing will wipe the smiles from our faces,” he wrote on Instagram this week.

PSG’s form is concerning, however.

They are through to the Champions League quarter-finals but performed poorly in the second leg of their last-16 tie against Barcelona. Not helped by injuries or coronavirus infections in his squad, Pochettino has lost three of his first 12 Ligue 1 games.

“Despite everything I am extremely positive,” he said this week.

“We are in a good position in Ligue 1 and we are lucky to still have our fate in our own hands in all competitions.”

His comments came before PSG beat Lille 3-0 in the last 16 of the French Cup in midweek with Kylian Mbappe scoring twice to make up for an error in gifting one goal to Nantes.

The next two league games are crucial, with Sunday’s game in Lyon followed by a home clash with leaders Lille immediately after the international break.

Paqueta will have a big part to play if Lyon are to get the better of PSG. The 23-year-old Brazil midfielder was outstanding when Rudi Garcia’s team won in Paris in December and his arrival from AC Milan for 20 million euros ($23.9m) at the start of the season has been key to making Lyon title contenders.

The left-footed playmaker — who was brought to Milan by Leonardo, now PSG’s sporting director — had scored three goals in four league games before being sent off in the 1-1 draw at Marseille late last month. He returned from suspension last weekend at Reims and will start against the reigning champions on Sunday.

9 – Neymar has not featured in any of PSG’s last nine games as he recovers fitness following his latest injury.

5 – Lyon have beaten PSG five times in Ligue 1 since the start of 2011/12, more than any other team has managed against the capital club under Qatari ownership.

3 – Jorge Sampaoli can become the first Marseille coach to win his first three Ligue 1 games in charge since Elie Baup in 2012 if his side beat Nice.