The World Cup is the dream of all Guineans 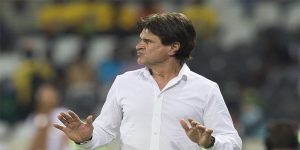 Guinea have never graced the FIFA World Cup
Syli Nationale are in a qualifying group with Morocco, Sudan and Guinea-Bissau
Coach Didier Six assesses their chances of making history

Guinea’s youth teams have competed on the world stage on multiple occasions, participating at the FIFA U-20 World Cup twice (Japan 1979 and Korea Republic 2017) and no fewer than four editions of the FIFA U-17 World Cup.

One factor that has contributed to the country’s successful national youth teams is the exceptional football academies located in the capital, Conakry. Even when the country grappled with an Ebola outbreak between 2014 and 2015, their U-17 and U-20 teams made the World Cup.

So why have the senior team never managed to qualify for the global showpiece?

FIFA.com spoke with Guinea’s French coach Didier Six, who enjoyed a notable playing career with French, English, Turkish and German clubs and was part of a wonderful France team that dazzled on the world stage and won UEFA EURO 1984.

After hanging up his boots, Six, like many French coaches, opted to forge a coaching career in Africa rather than staying in Europe. Having guided Togo to the quarter-finals of the 2013 Africa Cup of Nations, progressing from a tough group featuring Algeria, Tunisia and Côte d’Ivoire, he was appointed coach of Mauritius. In charge of Guinea since 2019, his goal – as he explains in this interview – is to lead the country to their maiden appearance at the FIFA World Cup™.

FIFA.com: What did you make of the team when you first arrived in Conakry?

Didier Six: I don’t like to criticise those who preceded me, as they may have experienced problems that I could face in the future, but in general the team was suffering because of non-sporting issues, and we had to get things back on track. The standard of football in Guinea is great, and with discipline everything will be up to scratch.

The country’s youth teams have enjoyed considerable successes, but the Guinea senior team have never qualified for the World Cup. Why do you think that is?

These things can happen – there are numerous strong teams that have never made the World Cup. Qualification isn’t inevitable and the competition is really fierce, given that 54 African countries are competing for just five spots, although that number is set to increase in the future.

What’s your goal for Guinea in these World Cup qualifiers? Is it to lead the country to the finals for the first time?

Qualifying for the World Cup is the dream of all Guineans, be it the fans, the players or the president of the football federation. When I accepted the job, he put reaching Qatar 2022 as a clause in my contract. That said, we’ll face strong opposition in our group and our task won’t be easy, especially now that even the continent’s lesser lights have developed and are no longer soft touches.

How would you assess Morocco, Sudan and Guinea-Bissau, your opponents in Group I?

On paper, we’re second favourites after Morocco but, as I just said, teams like Sudan and Guinea-Bissau have had some good results. This came as no surprise to be me because Africa’s smaller teams have come a long way and now make things quite difficult for opponents.

How do you envisage your derby games with Guinea-Bissau?

We’ll play them the same as we do the other teams but with even greater focus. Players seeking to represent their national team must have fighting spirit, as that is one of main reasons sides get good results. As coaches, we’re obliged to pick players who possess this mentality. So far, I have Naby Keita, who plays for Liverpool, Amadou Diawara at Roma, and Mady Camara at Olympiacos, but I don’t have players at Real Madrid, Barcelona or Bayern Munich. That said, we need to be able to compete with the squad we have available, but even before that, we have to make sure players have this fighting spirit. That’s very important.

Although Naby Keita doesn’t play much for Liverpool, he’s still the top Guinean player at present. Have you built the team around him?

It’s not about building the team around a specific player. In my opinion, Keita has magical feet, and I decided to give him the captaincy because he’s a true leader. He’s never abrasive with his team-mates. The way he talks to them is very similar to the way Zidane deals with his players, and he communicates the message in a wonderful way. When he came back from injury, I gave him two full games in four days and he helped us a lot, like scoring against a strong Mali team in Mali. He puts himself at the disposal of the team and his team-mates do all they can to assist him. We always need his magic and battling spirit on the pitch.

You’re currently based in Conakry and doubtless see a lot of local football. What do Guinean players need to do to be more represented in European leagues, like their counterparts from Algeria, Ghana, Côte d’Ivoire, Morocco and elsewhere?

We all know that Guinean players are technically very skilled, and things in Guinea are slowly getting better. When the national team get good results, players get attention from overseas. There are also clubs that have come a long way, such as Hafia and Horoya Conakry. People here play in their neighbourhoods and sometimes I see them playing in the street as I drive by. I’ll often be captivated and wait to see a shot or the end of a move. Guineans are very passionate about football.

Do you think that an African team can reach the latter stages at Qatar 2022?

Why not? There’s a lot of potential in Africa and there’s been a major transformation in terms of mentality. In addition, there are so many African players based in Europe now. Algeria have an excellent squad, the same goes for Morocco, and we can’t forget about Egypt either. Now, they all must get over the idea that an African team can’t go beyond the quarter-finals, which Ghana most recently reached. There are many good teams such as Cote d’Ivoire, which were previously very strong but are now in the process of rebuilding.

How do you prepare your team during these challenging times caused by the Covid-19 pandemic?

Instead of having a squad of 30, we call up 40-45 players. FIFA have recently passed rules that allow us to have bigger squads. This has helped coaches as they now have greater flexibility during these difficult times.