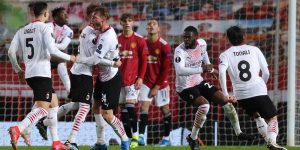 AC Milan have the advantage after the first leg of their UEFA Europa League round of 16 clash with Manchester United thanks to Simon Kajer’s late goal in a 1-1 draw at Old Trafford on Thursday.

After Rafael Leao and Franck Kessie had first-half goals ruled out for the Italians and Harry Maguire contrived to miss a very good chance for the Premier League outfit, winter arrival Amad Diallo popped up with an excellent headed goal to separate the two sides. Bruno Fernandes teed up the Ivorian youngster who joined from Serie A side Atalanta BC back in January and the 18-year-old beat Gianluigi Donnarumma to open the scoring and it looked like it would be the only goal of the game.

However, deep into added time, Kjaer headed home from a corner to ensure that Milan return to Italy level and with an away goal to their name going into next week’s second leg. It was not the classic that the continental histories of both sides promised that it would be, but it still delivered a good dose of entertainment and controversy and the tie is now set up for an absorbing second leg to see who reaches the quarterfinals.