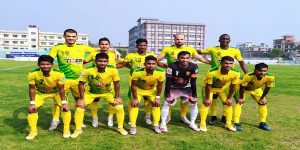 Striker Nihat Zaman Ucchash continued his prolific form as he netted a lone goal for Arambagh.

Arambagh took the early lead in the very 4th minute when Ucchash gave his team a deserving lead from a penalty. But the lead did not last long as Rahmatganj staged a fight back when Lorougnon Christ Remi restored the parity scoring the first goal for his side in the 16th minute of the match.

After the resumption, Rahmatganj came to the field with more organized way and added three more goals in the second half. Nayan doubled the lead in the 53rd minute and further widened the team’s margin scoring his second and third for Rahmatganj in the 77th minute of the match.

Khurshed Beknazarov joined the party by sealing the victory scoring the fourth goal for Rahmatganj in the 84th minute of the match.

The traditional old Dhaka outfit Rahmatganj MFS clearly dominated the proceeding, especially in the second half, and notched their deserving victory on the day while Arambagh KS were totally off-colored except the day’s lone goal.

The day’s win saw, Rahmatganj moved up at eighth position with 13 points from 12 matches while bottom-ranked Arambagh Krira Sangha, who failed to secure any win in the league so far, remained at their previous collection of one point playing the same number of matches.