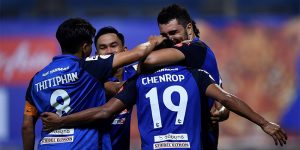 That result puts them 19 points clear of their nearest rivals, Buriram United and Port FC, meaning that the title race is mathematically over with six rounds of the 2020-21 campaign still to be played.

The title is BG Pathum United’s first in the top tier of domestic football and comes a season after they won the Thai League 2 title in the 2019 calendar year.

It is silverware which has arrived both weeks early and months late. They played their first match in this campaign in February 2020, remaining unbeaten both before and after a six-month hiatus from March to September last year to surge well clear of the chasing pack.

With their name all but on the trophy even before Thursday’s clash, any fears that BG Pathum United wouldn’t get the job done against Sukothai were dispelled inside seven minutes, with veteran attacking midfielder Sumanya Puraisai’s speculative free-kick evading everyone and floating into the net.

Brazilian Victor Cardozo put the icing on the cake with 20 minutes remaining, easing home a penalty kick to register his 15th goal of the campaign, second only to Barros Tardelli’s 19 in the Thai League 1 Golden Boot race.

Attention now turns to Pathum United’s bid for an unbeaten season. Dusit Chalermsan’s side have won 21 and drawn three of their 24 matches, with Muangthong United and Buriram United the only other Thai clubs to have gone unbeaten in the top division.

Also on the agenda is the club’s 2021 AFC Champions League campaign, where they have been drawn against Ulsan Hyundai, Viettel FC and the winners of a play-off.