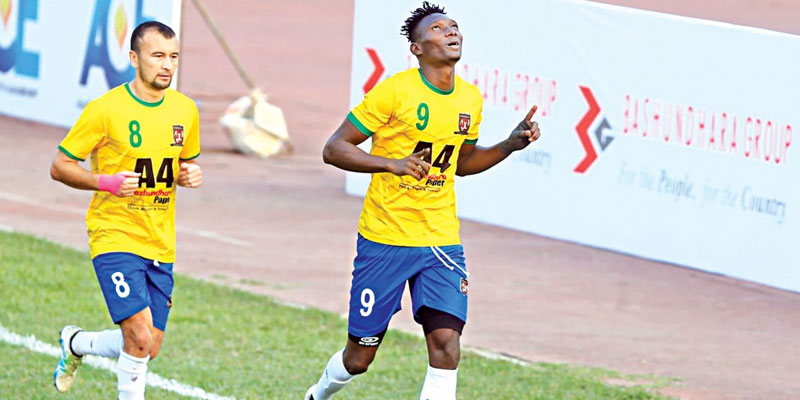 The Gambian striking duo of Sulayman Sillah and Omar Jobe, and Uzbekistan’s Jonov Otabek struck a goal apiece to help the three-time champions climb to second position in the 13-team table with 22 points from 10 outings, 10 points fewer than leaders Bashundhara Kings, who have played a match more than Sheikh Jamal DC.

Sheikh Jamal, who came into the match on the back of four successive draws against Abahani, Kings, Uttar Baridhara Club and Bangladesh Police, looked positive and dominated throughout the match against the Gopibagh-based outfit playing without a head coach in the last four matches.

The so-far unbeaten Sheikh Jamal came close to breaking the deadlock in the 18th minute but goalkeeper Titumir Chowdhury denied Sulayman Sillah by thwarting a close-range header before Joseph Nur Rahman saw his powerful shot float over the Brothers Union post in the 23rd minute.

Sulayman then made amends to brilliantly bring down a Monir Hossain right-flank cross inside the box before launching a right-footer into the far post to give Sheikh Jamal a 34th-minute lead.

Sulayman’s countryman Omar Jobe then all but doubled the margin after beating advancing goalkeeper Chowdhury but his overhead chip came off the post two minutes before the break.

After resumption, Jobe made it 2-0 in the 59th minute as the Gambian forward, availing a long ball, advanced into the box from the left to place to the right of the Brothers keeper to net his 12 th goal of the league and its joint top-scorer along with Robson Da Silva of Bashundhara Kings.

Otabek sealed the result in the 76th minute when he found the back of the net with a 25-yard free-kick before Faisal Ahmed pulled one back for Brothers Union in the 81st minute with a header off a Furkat Jon free-kick.

Jamir Uddin put Police FC ahead in the 14th minute before Fredrick Pooda doubled the lead in the 29th minute.

Trailing by two goals, betting-scam-hit Arambagh pressed for goals and the promising Nihat Zaman Ucchash pulled one back in the 72nd minute by scoring his third goal in the league. With their third win, ninth-placed Police raised their tally to 12 from 10 outings while Arambagh remained at bottom with one point from 10 matches.