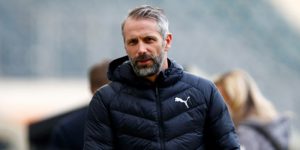 Borussia Moenchengladbach take on high-flying Manchester City in the Champions League Wednesday with the German club’s coach Marco Rose struggling to deal with the fall-out from the announcement he will join Dortmund next season.

Pep Guardiola’s buoyant City come into the last 16, first leg, tie in Budapest on the back of a record 18-match winning run in all competitions.

In contrast, Gladbach are reeling from Saturday’s shock 2-1 home loss to second-from-bottom Mainz.

Rose blamed the defeat on the disruption caused by last week’s bombshell announcement he will coach rivals Dortmund in 2021/22.

News of his planned departure has also incurred the wrath of furious Gladbach fans.

“And I bear responsibility for that.”

The first-leg tie was moved from Moenchengladbach to Budapest because of Germany’s Covid-19 travel restrictions.

While Guardiola’s City dispatched the likes of Everton, defending champions Liverpool and Tottenham in the Premier League in recent weeks, Gladbach have taken just a point from their last three Bundesliga games.

If Rose’s two-year tenure in charge of Gladbach is not to come to an inglorious end, he has to turn things around quickly.

With City looming, Rose said his immediate task is to gain “trust and calm” among his squad.

After City, Gladbach have an away league game at second-placed RB Leipzig on Saturday, then host Rose’s future employers Dortmund in a German Cup quarter-final tie next Tuesday.

Before the Mainz defeat, Gladbach captain Lars Stindl insisted news of Rose’s departure will not jeopardise the season, but Saturday’s performance suggested otherwise.

However, news that Rose is quitting could trigger other departures at Gladbach.

Germany midfielder Florian Neuhaus, who has a release clause in his contract, is urging his team-mates not to show City too much respect.

“Courage is a key factor,” he told Kicker, adding that his future plans are unclear past the end of the season.

“If we play to our best twice, then we have a good chance of going through.

“During the group stages, we learned how crucial a self-confident approach is,” he added after Gladbach drew against Inter Milan and Real Madrid.

Facing star-studded City in the last 16 of the Champions League is the biggest test Rose has faced in two years as Gladbach coach.

The 44-year-old former defender has forged a reputation as a rising star coach by rousing sleeping giants Gladbach.

Before their recent slump, they beat Bayern Munich, RB Leipzig and Dortmund at home this season.

Since taking charge in 2019, Rose has delivered on his promise to get Gladbach playing “dynamic, fast, active, combination football”.

He has steered ‘the Foals’ to the knock-out stages of the Champions League for the first time.

He had already proved himself by winning back-to-back Austrian league titles with Red Bull Salzburg before joining Gladbach.

In his first season with Salzburg, Rose masterminded wins over Lazio and future employers Dortmund in a run to the Europa League semi-finals in 2017/18.